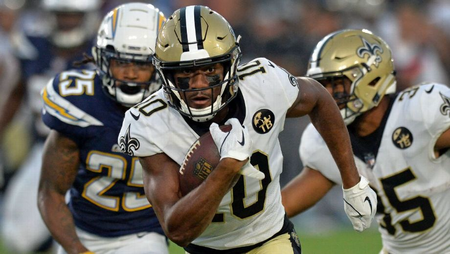 METAIRIE, La. -- Sean Payton gave one of the best pieces of fantasy advice in recent memory two years ago, when he said of rookie receiver Michael Thomas: "I don't follow fantasy football, but shoot, I'd try to have him."

Unfortunately, the New Orleans Saints coach isn't doing any favors in that department this summer.

Outside of Thomas, the pecking order for the rest of the Saints' wide receiver corps is one of the hardest to pin down in the entire NFL. Their preseason usage has offered little guidance. And Payton said after Saturday's win at the Los Angeles Chargers:

"That depth chart is like written in chalk. It's not permanent ink."

Newcomer Cameron Meredith has great potential in New Orleans' offense if he returns to full health after signing as a restricted free agent. And he appears to be on the mend from the major knee injury that wiped out his 2017 season with the Chicago Bears exactly one year ago on Aug. 27. But he remains a work in progress after missing a couple weeks with an unspecified ailment early in camp. ...