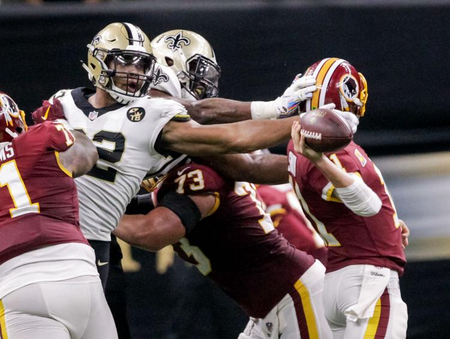 The Saints are going to be a team that rotates players on defense.

After five weeks, it appears clear the team is comfortable using a rotation of players at linebacker and at safety. That could change, but it appears more likely it will continue on at this point.

Safety Vonn Bell ended up claiming a larger role against Washington after cornerback Marshon Lattimore suffered a concussion, but he would have outpaced Kurt Coleman either way. Bell has settled in as the team's nickel safety, while Coleman serves in base packages.

Defensive end Marcus Davenport also played the most snaps (35) he's played in any game this season. And the rookie earned it. He stood out from start to finish and made several impactful plays on the NFL's biggest stage. ...

Similar threads
How many sacks for Marcus Davenport if he is healthy for the entire season?
Saints D-line coach says Marcus Davenport 'definitely has room to get better' even after strong second season
Share:
Facebook Twitter Reddit Pinterest Tumblr WhatsApp Email Link