"We want to improve our football team," Loomis said. "At the same time, we have to recognize the resources that we've got. And we've got some players on our team that are going to command some of those resources, too."

The Saints pick 10th in the April 26-27 NFL draft and own all seven of their allotted selections
Click to expand...

Didn't we give the Dolphins a 6th rounder for Mare?

Pdlc said:
Didn't we give the Dolphins a 6th rounder for Mare?
Click to expand...

The Dolphins should have to give us back 2 4th's for that debacle.

Well I guess what goes around comes around, They've got a long way to go to erase the Ricky Williams trade though.

Offline
Those names are ambitious. I hope we get at least one of the corners so we can pick more LB's and a DT in the draft.

Offline
CB is just one of those positions that I would rather bring in FA and nor Rookies because of the learning curv.

Offline
You can take Nnamdi Asomugha off that list cause he will get franchised.

That would just about break the bank.....but it sure would be nice

Offline
Boley and Trufant are very close in talent to Samuel and Briggs and would be significantly cheaper. Those are the two I hope we can steal away from other teams.

If we did get Boley and Trufant, while managing to get Philips and Lofton from the draft we would be a very solid defense.


I like the list they say we are looking at, these are some talented guys and most if not all of them will be franchised, I wanted Boley in the 04-05 Draft and he may not wanna be in ATL right now because of the 'transition" period there going threw so we might be able to lure him away, but if a guy like Corey Redding can be franchised, I'm sure Boley will be to.


The Saints have six unrestricted free agents who held down starting positions a year ago. Linebacker Marc Simoneau figures to be on his way out of town, while the jury is out on defensive tackle Brian Young, offensive guard Jamar Nesbitt, center Jeff Faine, tight end Eric Johnson and wide receivers David Patten and Devery Henderson.

Glad to hear that they dont expect to bring back Simoneau.

crogers1224 said:
CB is just one of those positions that I would rather bring in FA and nor Rookies because of the learning curv.
Click to expand...

I agree completely, but at the same time... you have to pay out the ying-yang for a good FA CB.

I'd really like to see the Saints make a play for Cardinals RFA CB Eric Green. He's coming off a season ending groin injury, and his replacement Antrel Rolle played well in his place.

Green would carry a 3rd round price tag, but he's well worth it IMO, and could be a legit shut-down CB in this league.

Jovan Haye would be a great addition, but I can't imagine the Bucs letting him get away... Let alone to a division rival. Same goes for Michael Boley, only he's way better than Haye... so no chance at those 2.

Briggs will be too expensive, and if Dansby isn't tagged, he probably will be too. Samuel, Trufant, and Asomugha (if they ever even see the open market) will be seeking HUGE salaries.

I'm willing to bet anything that the Saints don't get any of these players.

Bargain bin, middle-tier guys with upside... that's where I think we'll be looking... just like we usually do.

Offline
Just pointing out, that the article spcifically states Loomis didn't mention any names. The author just made a list of the big D FA's and put them in the following sentence. So this is really nothing new and there is no proof we are actually pursueing any of those guys (although I'd bet we are interested in some of them). 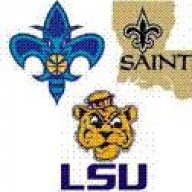 Offline
I'd love me some Boley....