Some thoughts on Reggie Bush and next season (1 Viewer)

Offline
I will not lie, when I saw Reggie Bush at the NO Arena watching Cp3 do an incredible job of leading a team that was being out performed win a game they should not have won, I wondered to myself what Bush could take away from this game. I mean he was watching a potential NBA MVP do the things he has not yet done. Be a crucial game breaker and be the type of player Defenses fear. Lets face it Bush does not exactly strike fear into NFL DC's right now. I mean they see him as a very good novelty act who is used more as a decoy then a real weapon.

That has to end. Bush has to become more of a weapon that we drafted him for.


and thats where this season comes into play. I hope if Reggie does one thing this season, he will become the great player he was at USC and take it to the next level. I remember Bo Jackson's days at Auburn and how he struck fear into the hearts of opposing defenses. Bo was the truest form of a weapon At RB I has ever seen. and he did it at the next level with the Raiders. Bo could do it all and he proved it time and time again. But that being aside, this is Bush time to put up or shut up. He has two years behind him so he should know what is expected of him and be ready.

If you have the weapons and the skills to be good, great, but at the same time a great player, regardless of sport, does his best work when he makes others around him better. If Bush gets the hang of that, the sky's the limit for him. We have a make it or break it season for the Saints, its time we get back to the fundamentals of what makes us a good team and make the word playoffs a reality again.

And it sort of all starts with Reggie Bush. If he does his part, things will work out fine

Offline
in 28 games he has 2300 yards from scrimmage and 14 tds. not to shabby. not to mention he actually does strike fear in defenses because they look at games like san fran tampa dallas and the giants from two years ago and look at what he can do if you dont pay attention to him.

Offline
If reggie was down on himself at all, I, too, hope he can look to Paul and see what he can become.
OP

Offline
Exactly, lil, they know what he is capable of. what he could do if he ever got unleashed. My point is to say that for the sake of succeeding next season and having another 2006 like season, Bush has to be that player again. I mean a true home run hitter, the type of guy we know him to be. I will admit it, Bush has a lot of skills, and maybe the Saints Coaching staff needs to utilize it more creatively. But it has to be done. I want Bush to be the type of player Chris Paul is for the Hornets. is like night and day right now. Paul makes people take notice and be weary of him and his abilities. I want the same to happen for Bush. Because I know he can do it, MY God he did it for 3 years at USC so it was no overnight sensation. Lets see what made him special I say. 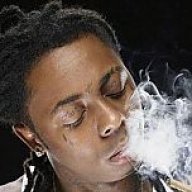 Offline
he is a force to be reckoned with. period.

halifaxer12 said:
he is a force to be reckoned with. period.
Click to expand...


As for the decoy thing, You can't be a decoy unless other teams are scared of what you can do. People talk about how we don't have a good enough recieving corp but somehow brees has more yards than anyother quarterback than manning. seeing how some of these socalled second rate recieve get open has alot to teams playing towards reggie.

Offline
How can you say he doesn't strike fear into opposing defenses? He is what they gameplan against. More so than Brees and Colston, it's Bush. Especially when deuce went down. Haven't you seen how defenses swarm around him? It's quite obvious to me. He is always the first check a defender makes....everytime..

watch the games again. you will see.

we need other weapons to really step up. if they are not sure where we are going, reggie will flourish. The big three, really need a supporting cast that can bring it.

Colston, Meachem, and Bush.... oh my. That's a hand-full for any DC. And let's never forget those sneaky lurkers.... Miller, Patten, Johnson, Henderson, Moore and... the Deuce. -Plus- A guy like D.Brees pulling the trigger.

firecouch said:
How can you say he doesn't strike fear into opposing defenses? He is what they gameplan against. More so than Brees and Colston, it's Bush. Especially when deuce went down. Haven't you seen how defenses swarm around him? It's quite obvious to me. He is always the first check a defender makes....everytime..

watch the games again. you will see.

we need other weapons to really step up. if they are not sure where we are going, reggie will flourish. The big three, really need a supporting cast that can bring it.
Click to expand...

Watch R.Bush shift and five defender shift with him. Tell me he is not an effective Decoy?

Offline
Reggie and CP3 live one floor away from each other and are often hanging out during off days when neither has anything to do. i believe by watching Chris do what he's done will no doubt only help Reggie.

JustaCoastie said:
Watch R.Bush shift and five defender shift with him. Tell me he is not an effective Decoy?
Click to expand...

So many times I've seen Reggie go out for a pass, and I catch the safeties take just one step in his direction. A QB like Brees is good enough to take advantage of that slight delay every single down.

Not to mention. Teams are more reluctant to blitz when Reggie is back there because there aren't many defenders who can cover him one on one out of the backfield.

Offline
He'll improve, he knows what it takes and he has what it takes, nothing about his preparation or lack there of is a secret, and I think the fact he pretty much admitted it and said some of the same things we were feeling (about his off season preparation) should be confirmation that he will go into this off season with the determination to bounce back from a disappointing second year.

Now I'm not the type of guy to take what he said and get all happy and say he is gonna rush for 1,500yrds and have 8-10 rushing TD's...I just think it will show because he will be more consistent in his running and show better technique when running between the tackles and hitting the holes, the little stuff that turned into big stuff, will hopefully be neutralized with more practice with his teammates and coaches.

Offline
As if summoned by this thread, there was this on the front page of this site:

Offline
Reggie has made the record book with the numbers he has put up in his first 2 years.
Imagine what he'll do when Payton starts lining him up at WR 8 or 10 times a game like he did at USC.

Offline
I heard rumors that Reggie is going to become a member of the Saints team. If that's really true, welcome aboard Reggie!

Offline
I will say it again,

Reggie's use as a weapon, has more to do with the coaches approach. Keep in mind that the numbers he has amassed in his first 28 games, he has a total of 312 carries.

Thats a grand total of 11 carries a game. Avg per carry 3.7 yards

Reggie will never be a legit weapon (on the ground), until the coach consistently gives him the opportunity.

Instead, Payton typically will abandon the run if the guys gets stopped more than twice in in a row.

So when it all boils down, Reggie gets 11 cars a game, averaging 3.7 yards per rush, on 312 career carrers.

Ladainian Tomlinson had 336 carries his rookie year, for a whooping 3.6 average per rush.

Without the opportunities, Reggie can't be a Chris Paul, who has the ball every offensive possesion.

The only person that can make Reggie Bush a Chris Paul type player, is Sean Payton. Hand the kid the ball and let him run.
Show hidden low quality content