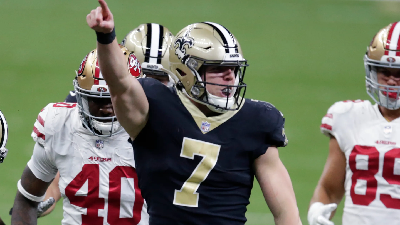 METAIRIE, La. -- The New Orleans Saints will start Taysom Hill at quarterback ahead of Jameis Winston on Sunday against the Atlanta Falcons, a source told ESPN's Adam Schefter.

Hill took all the starter reps at practice this week, according to the source. A source also told ESPN's Dianna Russini that Winston will not be part of any offensive packages unless needed because of injury.

The move comes as a mild surprise, because Winston is more experienced and replaced Drew Brees during the second half of last Sunday's 27-13 win over the San Francisco 49ers after Brees suffered cracked ribs and a punctured lung.

The Saints' decision is a reminder that coach Sean Payton and team executives have always maintained that Hill could be a starting NFL quarterback. They backed up that belief by signing him to a two-year, $21 million contract extension as a restricted free agent this offseason.

Hill, who was a dual-threat quarterback at BYU from 2012 to 2016, has carved out a unique role with the Saints over the past four seasons as a read-option QB/RB/WR/TE/FB/special-teams specialist.

He has completed just 11 of 20 passes in his career, including the playoffs, for a total of 255 yards with zero touchdowns and one interception. Hill has not thrown a touchdown pass since Nov. 26, 2016, in his final season at BYU.