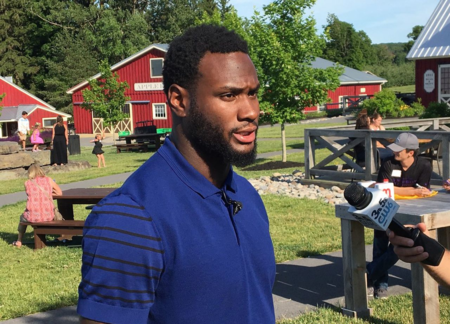 Syracuse, N.Y. — Kids and adults gathered at the Boys and Girls Club on East Fayette Street Monday afternoon to pick up T-shirts, plates full of pizza and assorted food and backpacks.

The event was courtesy of Latavius Murray and Mike Hart, two former Onondaga High School football stars who are still earning a living in the game they love. Hart coaches running backs at Indiana and Murray, about to start his seventh NFL season, will spend his second year with the New Orleans Saints.

The Syracuse giveaway on Monday was the first official “Hart & Tay Train Foundation” collaboration between Murray and Hart. The two have held football camps together but their joint charitable work began Monday at the Boys and Girls Club. Murray said the event was the first of many planned for the Syracuse area.

Murray, 30, spoke by telephone Monday from Florida, where he is working out in preparation for the 2020 NFL season. He recently bought a house just outside Orlando. He and his fiancée, Shauntay, live there with their three children, Major (21 months), Marley (8 months) and Jayde (5). Murray met his fiancée, a Florida native, when he was 12. He still has family in Titusville, Florida.