State Of The Saints: Will The Empire Strike Back? (1 Viewer) 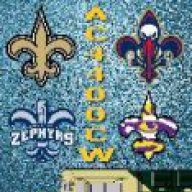 Offline
The narrow treacherous road through the off-season is slowly coming to an end for the New Orleans Saints. It’s been hot, winding, and the weight of the world has been on the back of the boys from the bayou. Long has been the road and weary is it’s traveler with adversity as the only companion the Saints have had by their side. Adversity it seems, comes in many forms in life. For the 2012 New Orleans Saints it has taken the form of past sins, bad decisions, and a culturally changing league. Adversity at its worst will bring the best out of the one suffering at her hand. It takes the heart of a champion to get up after being constantly knocked down. Luckily for the fans of the New Orleans Saints that is exactly what is in the heart of every player who wears the black and gold.

The Saints 2012 campaign will officially start at home in the Mercedes Superdome on September 9th against the Redskins and newly crested NFL quarterback Robert Griffin III. Even the casual fan knows that the season starts before the draft not at week 1. That being said, what state are the Saints in? Have they been so affected by the scandal of Bountygate that their season is a foregone conclusion. Will Drew Brees sign? Has the weight of the off-season muted anything that the they can or will do?

One of the few things that the NFL’s front office couldn’t touch was the Saints’ roster. The core of the 2012 NFC South Division champions is well intact. By all accounts the only thing that has been heaped on the Saints in the locker room is bulletin board material. They have heard it all. They’re cheaters, no good do nothings, immoral, and low down dirty shames. They are the evil empire. While the American conscience is guilty until proven innocent the Saints have plenty to motivate them. New Orleans is still a deadly team to be dealt with in the coming season. Drew Brees shattered Dan Marino’s single season passing record of 27 years. Brees completed 46 passes for 5, 476 yards. Brees will not only be armed with a new record breaking NFL contract but, also with an offense that helped him set Marino’s record. Even with the departure of Robert Meachem(40 receptions for 620 yds) to the Chargers the Saints are still stacked at receiver. One reason for this is all world all pro tight end Jimmy Graham. Graham missed setting a new receiving yards record in 2011 by 17 yards (1,310 yds) to the Patriots tight end Rob Gronkowski (1,327 yds). Graham has been able to quickly ascend the tight ends of the NFL by becoming a freak on the field with his size, speed, increasing knowledge of the game and innate sense to find holes in the defensive backfield. Meachem will be missed but, Brees counters for the loss of players like this by throwing to the open receiver, not the best one all the time. This reason alone is one of the major reasons why the Saints offense torched defenses last year.

Speaking of defenses since Bountygate has surgically taken apart the Saint defense, is the defense worse for it? Gregg Williams for all his machismo and bravado wasn’t getting the job done. Consider this, in 2009 the Saints defense led by Williams was 3rd best in the league in turnover ratio (+11). This alone helped the Saints overcome pedestrian type defensive number and cap off a championship season. In his second year at the helm of the defense the Saints ranked fourth overall with a -6 turnover ratio. Williams had the defense headed in the right direction having them rely on solid play as opposed to waiting for Lady luck to strike. In his third and final year everything went south. In 2011 the Saints defense ranked 24th overall with a -3 turnover ratio. That left Williams desperately spouting off at the mouth more than usual and we all know what happened after that. Bountygate or not, Williams and the Saints were headed towards a separation in all likelihood. Given the 49ers dismantling of the defense with a well-known touchdown inept offense and the dwindling play of the Saints defense, Williams’ days were all but numbered.

Enter Steve Spagnuolo and his vaunted defensive genius (sans bounties). Spagnuolo’s run in St. Louis wasn’t what the Rams or he had expected and hoped for. This in part happened because Spagnuolo wasn’t able to solely focus on defense. The other side of it is that the Rams aren’t exactly the Giants. That being said, Spagnuolo has worked quietly and diligently to assemble his team on defense. The Saints have made several high-profile free agent signings in the off-season. The expected loss of their defensive captain Jonathan Vilma will be a blow but, the signing of Curtis Lofton will surly temper that loss. New Orleans stumbled across the finish line landing flat on their face. Lofton will make an impact immediately along with Chris Chambers and the rest of the Saints defense. Bountygate is in the Saints rear view and the Saints defense is looking forward to showing the rest of the NFL that they are better than anyone could have imagined.

The 2012 NFL season will be one that most will have discounted New Orleans before it begins. Those who know better will know it’s not wise to count a champ out before the fight starts. There are early indications that the Saints will do anything but lay down in the face of adversity. Even without the 1st and 2nd round to make picks in the 2012 draft the Saints still showed the ability to draft effectively. The Saints picked up Akiem Hicks in the 3rd round and made a slight splash with Nick Toon. If there is any question about the ability for the Saints to bounce back one can take a closer look at the 2006 season. If there is any lingering doubt after that they will more than welcome the chance to knock those notions out of their opponents and the media. The Saints are looking to take that bad taste out of their mouth from this past off-season and they know exactly where they want to put it. On the field, between the numbers of the players across the field from them.

State Of The Saints: Will The Empire Strike Back? | NEW ORLEANS RISING

Offline
That redheaded stepchild that's in charge will now hit our defensive players with suspensions, now that the draft is over. (the last step in his campaign against the Saints) Problem is, the NFLPA is behind our guys, and any suspensions handed down will be appealed, and most likely won't happen this year.