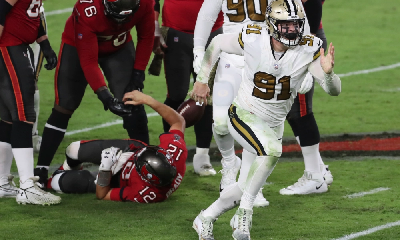 Which free agents should the New Orleans Saints re-sign in 2021? There are a number of hurdles ahead of them before it’s time to make those decisions, like finishing out the 2020 season and navigating the lowered 2021 salary cap. It could result in some cap casualties, which muddies the situation for players whose contracts are expiring.

Still, here’s our take on who should stay or go at this point in the season:

Hendrickson must be the highest priority for the Saints to re-sign after the season. He’s among the NFL’s sack leaders (7.5) and is tied with Cameron Jordan for the team lead in quarterback pressures (31), consistently winning his one-on-one matchups out on the edge. He and third-year pro Marcus Davenport have become a terrific rotation on their side of the line.

The franchise tag could be in play, but the Saints likely want to avoid that because it would really limit their financial flexibility (especially in light of the depressed salary cap). Hendrickson should be seeking a multi-year extension, and he’s earned it. After reaching deals with players like David Onyemata and Andrus Peat, fans should have some optimism the team gets this done.

Is it possible we could trade Andrus Peat and his bloated contract?
Show hidden low quality content