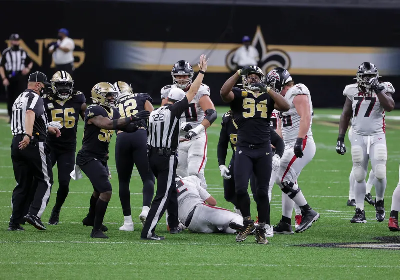 Zach Strief, the Voice of the Saints, was thrilled with the way the New Orleans Saints defense played in a 24-9 beat down of the Atlanta Falcons.

“The defense has been about as good as you could possibly ask for the last three games. They've been outstanding defensively. The secondary has been absolutely phenomenal. The pass rush has been fantastic. They're really coming together.”

The Saints' secondary limited Matt Ryan to 232 yards passing and nabbed two interceptions (though one was on a last-second Hail Mary at the end of the first half). The pass rush sacked Ryan eight times and registered 11 total QB hits. New Orleans also shut down the run game, holding Atlanta to just 52 rushing yards on 14 carries.

“It is dominant defensive football, the likes of which we have not seen here since the Dome Patrol, really,” Strief said. “You see it three weeks in a row, and you start saying this is who you are...at some point, it becomes who you are.”