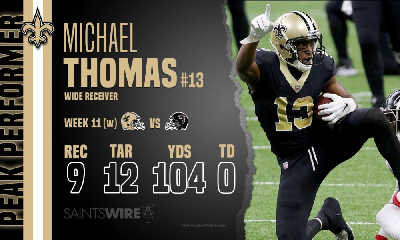 While Taysom Hill was the talk of the town in his first start for the New Orleans Saints, several teammates turned in great tape for their efforts against the Atlanta Falcons — and a few others left something to be desired. Here are our picks for standouts from Week 11:

The most impressive plays may have been the ones Alexander didn’t make. He correctly read two passes into the flat and broke on the ball near-perfectly, coming within inches of an interception and likely running it back for a touchdown both times. He just couldn’t seal the deal. If he keeps his head up when crashing down on the receiver to better track the pass, he might have two turnovers to his credit. But Alexander has added so much athleticism and improved eye discipline to the Saints defense while patrolling the middle of the field that it’s easy to see why the team traded for him.

McCoy didn’t have a bad game, but an offensive lineman is going to catch some flak if his holding foul wipes out a 57-yard touchdown pass. He was also dinged for allowing pressure in pass protection, but on the whole, there isn’t much to complain about for McCoy. The Saints had success running behind him and he mostly played clean football whenever Hill was looking to throw. It’s just a shame that his penalty took such a great play (and the points that came with it) off the board.