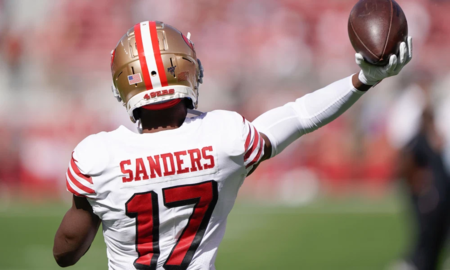 The New Orleans Saints will be bystanders during Super Bowl LIV, but the title game between the Kansas City Chiefs and San Francisco 49ers gives them an opportunity to do some advance scouting — both teams are on the Saints’ schedule for 2020. However, it’s also a time for the Saints to get a last look at several veteran players headed for free agency in March, providing possible upgrades for New Orleans. Here are four names we’ll be watching

Sanders is someone who’s been on New Orleans’ radar for a long time, going back to his first brush with free agency after starting his career with the Pittsburgh Steelers. Sanders’ talents were on full display in this year’s Saints-49ers boat race, in which the crafty route-runner caught 7 of 9 targets for a season-high 157 receiving yards. He’s exactly what the Saints need opposite Michael Thomas. The questions surround whether the 49ers will allow him to test free agency after trading multiple draft picks for him, and how much attention he’ll receive on the free agent market as one of the few proven quantities available. ...