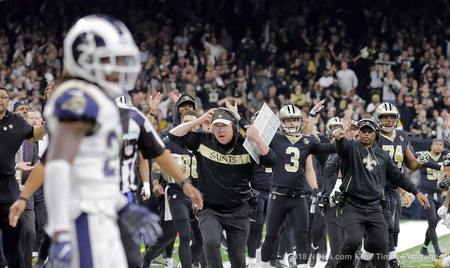 The NFL has given no official statement on the blown call that potentially cost the New Orleans Saints a spot in the Super Bowl, but a court filing Friday (Jan. 25) gave some estimation of the cost for a potential Super Bowl delay.

To replay any portion of the controversial NFC Championship loss by the Saints would cause a potential delay to the playing of an event that has an “investment of more than $100 million," according to a sworn affidavit filed by Joseph Sinclare, the Executive Vice President and CEO of the NFL.

The affidavit is in response to a lawsuit filed by Tommy Badeaux and Candis Lambert on behalf of Saints season ticket holders and the “Who Dat Nation” that calls for an unlikely re-playing of at least some portion of the NFC Championship.

A controversial no-call on what the Saints argued should have been a pass interference penalty caused the Saints to kick a field goal with 1 minute, 45 seconds remaining in regulation, allowing the Los Angeles Rams enough time to get into position for a tying field goal before winning in overtime. ...