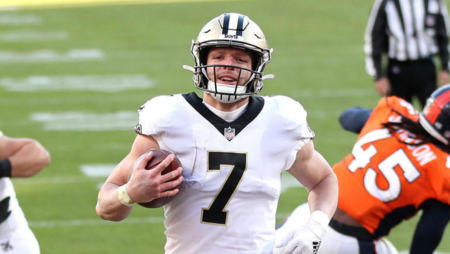 Taysom Hill has won both his starts as the New Orleans Saints quarterback, even if has last game left a lot to be desired throwing the football. Hill was just 9 of 16 for 78 yards with an interception (43.2 passer rating) in New Orleans' 31-3 victory over Denver -- missing a few reads and struggling to release the football over the course of the game.

The Saints ran the football 44 times -- or 69.9% of the time -- in the victory, which wasn't a direct result of Hill struggling to throw the football. Running the ball was part of the game plan, thanks to the Broncos' quarterback dilemma regarding COVID-19.

"Going into the game, the game plan changed in the last 24 hours so my mindset changed as well," Hill said. "I really became a game manager at that point and certainly the way Sean [Payton] called the game reflected that. We're not going to take any unnecessary risks that put our defense in a bad situation. ...