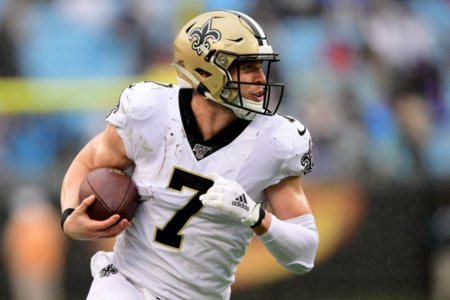 There is the definition of betting on the come — essentially, wagering on future success — and then there is the extremely ambitious investment the New Orleans Saints just made in Taysom Hill.

The franchise’s third-stringer behind Drew Brees and Teddy Bridgewater in 2019, Hill landed a deal on Sunday that is slated to pay out $21 million over the next two years. It includes $16 million in guaranteed money, along with incentives that could generate an additional $1 million.

If that sounds pricey for a backup quarterback, it’s because it is: Only the Indianapolis Colts’ Jacoby Brissett has a higher average salary as a backup quarterback, coming in at $15 million. It’s worth noting that Brissett hauled in that salary when he was slated to be the Colts’ starter last season — after piecing together some solid results at the position in New England and Indianapolis.

But Hill? He has 13 regular-season passes in his first two years in the league, zero touchdown throws against one interception and a grand total of 119 passing yards. Instead of a traditional role, his impact has come as a jack-of-all trades on special teams and some combination of running, passing and catching the football in the Saints’ offensive scheme....