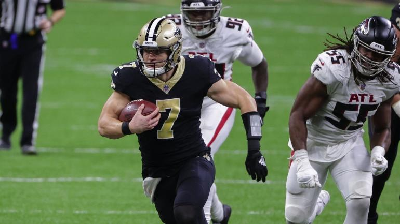 Taysom Hill made his highly anticipated first career start Sunday, which netted a familiar result for the New Orleans Saints -- another win. Hill certainly wasn't Drew Brees in New Orleans' 24-9 victory over the Atlanta Falcons, but he was efficient.

Hill finished 18 of 23 for 233 yards and recorded a 108.9 passer rating, with no touchdown passes and no interceptions. Hill is just the seventh quarterback in the NFL since 1950 to have completed over 78% of his passes in his first career start (minimum 20 attempts). Of those seven quarterbacks in that category, he joins Stan Humphries as the only quarterback to average over 10 yards per pass attempt (Hill averaged 10.1 yards per attempt Sunday).

Hill also rushed for 51 yards and two touchdowns (and a lost fumble), leading the Saints in both categories. He joined Daunte Culpepper as the only players in the Super Bowl era with at least 40 rushing yards and two rushing touchdowns in their first start at quarterback (Culpepper accomplished the feat in Week 1 of the 2000 season).

"I thought that he played well," said Saints head coach Sean Payton, evaluating Hill's performance. "He had the one turnover late in the game. ... We had a big touchdown pass called back. It's a good team win.