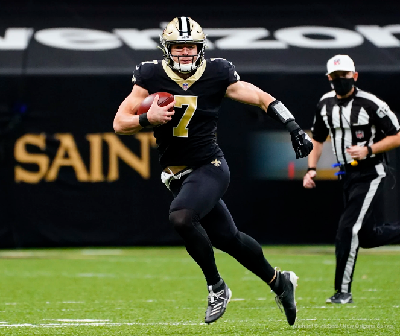 Taysom Hill admitted that last week was an emotional one for him and his wife, Emily, as they reflected on his journey from undrafted rookie in 2017, to "Swiss Army knife" player for the New Orleans Saints, to starting at quarterback for the Saints on Sunday in the Mercedes-Benz Superdome.

"I felt a lot of love from a lot of people," he said. "It was overwhelming, in a good way."

Then, Hill went about the business of overwhelming the Falcons in the best ways he could in a 24-9 victory for New Orleans (8-2), the seventh straight win for the first-place team in the NFC South Division.

Hill, starting in place of the injured Drew Brees, made his first start since his senior season at BYU in 2016. And to imply he was a major influence would be an understatement: He completed 18 of 23 passes for 233 yards, with no touchdowns or interceptions, and ran 10 times for a game-high 51 yards and two touchdowns. He also lost a fumble with 8:20 left in the fourth quarter and the Saints driving for another score; it was recovered at the Atlanta 18-yard line.

"Overall, I was happy with what we did," Hill said. "I think the first thing you come out, you look at turnovers and I was really disappointed that I put the ball on the ground late in the game. Felt like that was a drive where we could have just put the game away and I coughed one up and I was disappointed in that. I missed a couple of throws where the ball just kind of slid out of my hand. I think that those things are easy to fix.