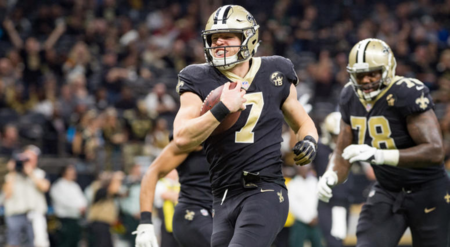 At first blush, Taysom Hill's performance in the New Orleans Saints' first preseason game could seem like a bit of a disappointment. The box score shows Hill threw for just 80 yards and tossed an interception that was returned for a touchdown. Box scores and stats, however, miss the nuance in football games, and this one certainly does a bit of a disservice to Hill's game against the Vikings.

That pick-six came after a nicely thrown pass from Hill that was juggled by tight end Dan Arnold. When Arnold couldn't secure the ball, Vikings cornerback Nate Meadors grabbed it out of the air and raced into the end zone. A bummer for Hill, but much more on an indictment on Arnold, who fans may remember dropped what could have been the game-sealing touchdown pass in January's NFC Championship game against the Rams.

But drops happen. So do bobbles, and weird interceptions. When Hill was asked about that play after practice on Monday, he did what all good quarterbacks do; deflect and make sure everybody knows that he has his receiver's back.