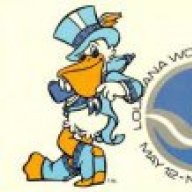 Offline
Just got through dropping off the kids at school.

One of the teachers pulled me aside as I was leaving and said she had something to tell me. Apparently, a week or so ago, it was time for the kids to go outside to play. My five-year-old didn't have a jacket, but she thought he needed one, so she grabbed one out of lost-and-found. She put it on him and zipped it up; he looked down and saw "OLD NAVY" on the jacket and his eyes got wide.

She sent him on his way, and looked out at the playground later - he was standing there crying. She went and asked him what was wrong, and he said he didn't like the jacket. When asked why, he said "I don't like Old Navy, I like the New Orleans Saints!"

He may not know brands yet, but he knows who he cheers for!

Offline
You are a good man, and a great father, I think you should write a book ...LOL

boxerharley said:
You are a good man, and a great father...LOL
Click to expand...

I'm with you brother!

Offline
One day I hope to have a son to be able to pass down the wonderful teaching as you have done with your son.

Offline
start em early! Thats great. Just hope that when they start understanding and getting "emotionally attached" as we have, the Saints will be perinnial winners!

MY son (13) has always pulled for the Patriots, since kids are prone to follow whatever team is hot when they become "sports aware." A couple of months ago, I was telling him the Patriots score and he bristled and said, "Dad, they are just my AFC team -- I am a SAINTS fan now!" Brought a tear to the eye of a proud Poppa.

MY son (13) has always pulled for the Patriots, since kids are prone to follow whatever team is hot when they become "sports aware." A couple of months ago, I was telling him the Patriots score and he bristled and said, "Dad, they are just my AFC team -- I am a SAINTS fan now!" Brought a tear to the eye of a proud Poppa.
Click to expand...

Richard said:
since kids are prone to follow whatever team is hot when they become "sports aware."
Click to expand...

What the hell happened to us?

Offline
*****, i can't even get my gf's son to watch TWO plays let alone have a fav team , bandwagoner or not

Offline
LOL that's how it happened to me back in the day.

Offline
My wife and I are going to have our first child in January, its suppose to be a girl. I already have Saints pacifiers and Saints bibs ready to go. She will be a Saints fan from day 1. 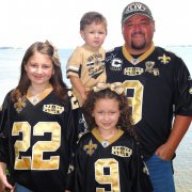 Offline
Great story, Thanks for sharing! kids are great. My wife, two girls and I were eating in a mexican restaurant the other day, and my two year old started singing "The Saints are coming" it was out of the blue and she doesn't speak very well. Needless to say, we got a big kick out of that! I guess she had the saints or at least the song in her head.

Offline
Great story. I have a 4 year old son who runs through the house yelling every time the Saints score.

He knows all the words to "Saints Go All the Way", "Who Dat" and "The Saints are Coming"

He can be in Wal-Mart, and start yelling "Who Dat Say Dey Gonna Beat Dem Saints?" as he goes down the aisle......

Offline
My ringtone is the who dat song. Everytime I get a call my 3 y/o chants who dat, who dat, go saints

During the games he knows all the cheers.....Deeeuuuucccceee, defense.

I have to be careful though since I haven't brought him to a game yet, my wife stays home and watches it with him; she teaches him cheerleader cheers. Like "sack that quarterback" or whatever the cheer is. It's a little disheartening, that is why next Sunday we are going to the SF game together!
Show hidden low quality content

We should be Grateful!

Probably an Unpopular Opinion, But I think It Should Be Said
2 3 4 5

Demeco Ryans should be a head coach next season
2