Teddy Bridgewater on what he learned from Drew Brees (1 Viewer) 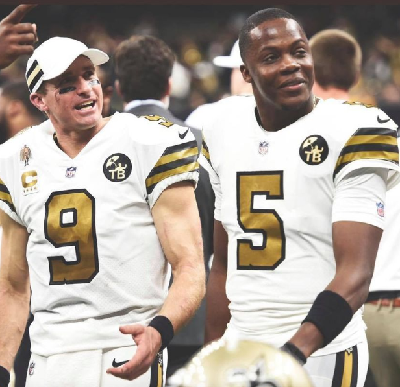 One year ago, the New Orleans Saints were at a crossroads. The face of their franchise, quarterback Drew Brees, would be out several weeks with a torn ligament in his thumb.

That thrusted Teddy Bridgewater into the starting role. And all the veteran quarterback did in Brees’ absence was lead the Saints to five consecutive wins, which was instrumental in New Orleans winning the NFC South division.

Bridgewater turned that success into landing a starting quarterback job this offseason with the Carolina Panthers, replacing longtime starter and former league MVP Cam Newton, whom the team released.

During an interview with FOX’s Michael Vick, Bridgewater shared what he learned from playing with Brees in New Orleans the last two seasons.

“When I first got there, I’m a vibes-type guy so I just had to feel him out,” Bridgewater said. “And I realized this guy was about his business. And he had this switch where he knew how to joke with the guys but he knew how to turn it on. And when he turned it on it was like ultimate competitor. That right there gave me more of a drive to compete. I always wanted to just to beat him at things and it was tough, Drew hates to lose.”