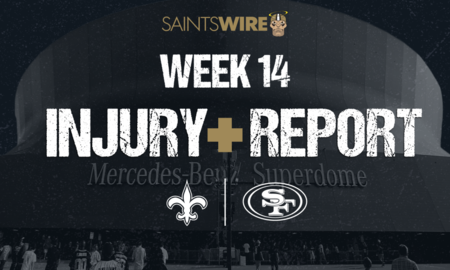 The New Orleans Saints and San Francisco 49ers published their final injury report ahead of Sunday’s big noon kickoff, including status updates for several players managing various ailments. Here’s what we learned after each team wrapped up practice on Friday.

For New Orleans, the Saints hope to all-world left tackle Terron Armstead return to the lineup a few weeks removed from a high-ankle sprain. But his practice participation has been limited throughout the week, so he’ll have to test out his ankle during pregame warmups on Sunday before they can reach a final decision. He’s officially listed as questionable to play.

If Armstead can’t go, expect veteran guard Patrick Omameh to again step into the lineup in his place, as he did in last week’s game with the Atlanta Falcons. Undrafted rookie Ethan Greenidge was active for the first time this year but didn’t get on the field thanks to Omameh’s performance in a tough spot. The 49ers boast one of the NFL’s fiercest defensive lines, so it’s anyone’s guess who plays left tackle for most of the day.