Thanks to Stephen and Chris and Good Luck (1 Viewer)

Offline
It has been a good year for the Reno Mahe Mahe despite bowing out in the semifinals, which is probably equivalent to making out with your mother (Never tried and don't plan on trying it, but I would imagine it leaves a bitter taste in your mouth

I just wanted to take the opportunity to again thank Stephen for running the league and thank Chris for taking the initiative for putting the league online. I had a lot of fun this year and I know it takes a lot of hard work for y'all to do what you do.

Good luck to Voodoo and the Destroyers in the Fantasy Bowl!

There is only one thing left for me to root for before this season comes to a close - a victory by my Eagles over the Saints!!! Christmas came early with a victory over the Cowboys, and I hear Jessica Simpson plans to attend every Cowboys game from here on out. Nice! I was actually in Dallas last year when Carrie Underwear was there. I like the trend of "Injured Thumb" bringing a girl to every home game against my Eagles

Anyway, I will be bleeding green and white and in my Westbrook jersey in section 306 on Sunday. It should be a good game.

Offline
There u go Steve thats who u can sleep with !!!!!

But now, it does not matter. I am still a huge Eagles fan. But if the Eagles win, its not the same as knocking off the hated Cowboys. All an Eagles win does is knock the Saints out of the playoffs and pushed the Eagles further down the draft order.

So I will be there, way up in section 600 something. But I will just be there enjoying the game. It will be OK if the Saints win this one. I just hope the Eagles play respectable.

Anyway, thanks for the kind words Tommy. I hope you play again next year. It will be much easier once we switch over full time to CBS.

And hopefully the Eagles have a better year as well! 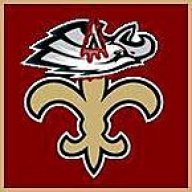 Offline
Tommy Tommy Tommy no.... don't wish that on the Bless You Boys, the Who dats desperately need this win, to continue to stay on the Vikings who will hopefully lose to the Redskins, Hail the Redskins fight for victory. and who knows maybe the G-Men will lose again.
Show hidden low quality content