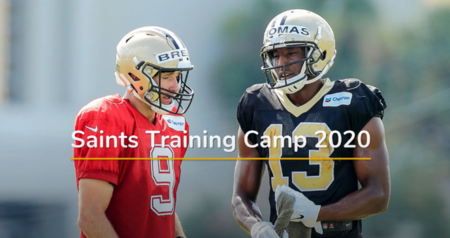 We're just a week out from New Orleans Saints training camp kicking off. While Sean Payton has downplayed the notion of this being an actual camp, it's going to be a quick speed to execution type of setting for the team. Here's a comprehensive A-to-Z look of what to look forward to over the several weeks.

A is for Adam Trautman. There's a lot of excitement for the third-round rookie Saints tight end, and his role in the offense will be interesting as we move forward. New Orleans has Jared Cook and Josh Hill in the fold as the primary guys, and we have to see what happens with Taysom Hill. Trautman could be an interesting red zone threat.

B is for Brees. Drew Brees has had a roller coaster offseason, but the 41-year-old enters his 21st season in the league and 16th with the Saints. With him at the helm, it gives New Orleans their best chance of getting back to and winning a Super Bowl.

C is for C.J. Gardner-Johnson. He enters the season as the favorite to hold slot duties for the Saints, and is primed for a breakout year. He's going to be one of the most exciting players to watch in 2020. He announced recently via his Instagram that he's changing his name to Ceedy Duce. ...