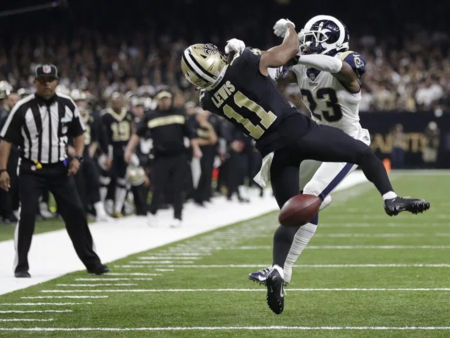 It wouldn’t seem to be a good thing when the major theme of a Super Bowl is the team that’s not playing in the game.

But this is the NFL, which could televise a bunch of bruised bananas, add commercials and a halftime show to it, and break TV ratings records. As bad as I feel for the Saints, who got jobbed by a group of officials experiencing hysterical blindness during the NFC Championship Game, well, thanks for the wintertime distraction. I’ve warmed my frozen hands over the burning trashcan of their anger the past two weeks.

There is no single entertainment event bigger than the Super Bowl in this country, possibly because it has become so much more than a football game. The lead-up to the big day usually follows the same script, with the same stories, most of which have absolutely nothing to do with the upcoming game. It is the same this year with the Rams and the Patriots, who play Sunday in Super Bowl LIII.

How long will Tom Brady, who has played in every Super Bowl since 1967, keep putting on his pads? Hint: Forever. ...