Something is brewing in Land Shark Stadium. Pun intended, but I digress. This week, the New Orleans Saints play guest to the Miami Dolphins in what figures to be one of the more intriguing matchups of the season. You see, the NFL has its conventional teams and its unconventional teams. There is absolutely nothing conventional about the Miami Dolphins…and it all begins on offense. This Sunday, the Dolphins will unleash the most complicated, unpredictable, butt-freaking-crazy formation the league has ever seen, against the New Orleans Saints. It’s a formation that leaves opposing defenses not only scratching their own heads, but the heads of those around them, which really makes things awkward for everyone involved. Yes, I’m talking about a concept so out-of-nowhere-whacky that it’s essentially impossible to defend. And no, I’m not talking about the Wildcat. The Wildcat has nothing on this. The Wildcat wishes it was this.

Ladies and gentlemen…meet the Platypus. 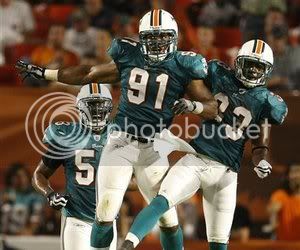 Linebacker Cameron Wake hurries to
line up behind center.
​

The Platypus formation could be the most aptly-labeled formation in the league, named after a venomous, duck-billed, beaver-tailed, otter-footed, egg-laying mammal. It’s a formation that prompts—no, demands—an immediate “what the hell?” So what is it? Well…that’s the conundrum. It isn’t anything at all, while simultaneously being everything at once.

After the success of the Wildcat in 2008, it was feared that teams would figure out the tricky formation, adjust their defenses, and shut it down. For a team that relies on trickery to succeed, this could not be allowed to happen. Thus, the Platypus was born. The goal? Unpredictability. And by that, I mean total unpredictability. Even for the Dolphins.

Prior to every down, offensive coordinator Dan Henning rolls a 100-sided die (he’s big into D&D). On the occasion that the die turns up a 1, the Platypus is called. At that point, Henning literally pulls names out of a hat to send players on the field. Each name drawn fills a different position. No one’s immune. “Quarterback, Soliai! Center, Starks! Fullback, Carpenter!” The names are drawn until all eleven roles are filled, during which the identified players hurriedly take the field at their newfound positions. By the time the process is finished, there are usually only two or three seconds left on the play clock—no time for a plan. Total unpredictability. The ball is snapped, and the play is underway. 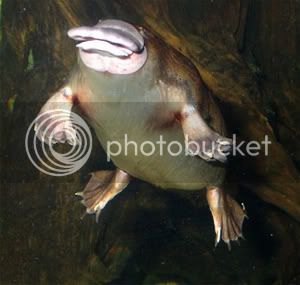 Seriously, what the hell is this thing?
​

As you can imagine, the Platypus wreaks havoc upon everyone, from the offense, to the defense, to the announcers trying to give the play-by-play. It is amazingly effective at its purpose of total bewilderment. If not anticipated, the sheer lunacy of it could shock the defense into an awe-inspired stupor. Or give them the ball, if Gibril Wilson punts. Nonetheless, it’s something the Saints are going to have to be prepared for.

A famous military tactician once said: “only chaos rivals chaos.” Okay, I admit, I just made that up, but someone famous probably said it at some point. What the Saints need to do is create their own defensive scheme to mimic the Platypus. Random players drawn out of a hat whenever the Platypus takes the field. I present to you: the Fruit Cake.

Yeah, you’re right, the name sucks. But the concept is sound. Does anyone really know what’s in a fruit cake? Is that really fruit? It looks more like melted gummy bears. And what’s all that other stuff? Grains? Nuts? Leftovers? Just like the duck-billed platypus, fruit cakes defy classification. The Fruit Cake defense works just like the Platypus offense. Random names drawn out of a hat. Strong side, Shockey! Corner, Evans! Safety, Brees! Who wouldn’t want to see Drew Brees level a punter running across the middle of the field? I can envision it now. On one side, Tony Sparano is yelling, “Platypus! Platypus!” On the other, Gregg Williams: “Fruit Cake! Fruit Cake!” Total insanity. Chaos vs. Chaos. 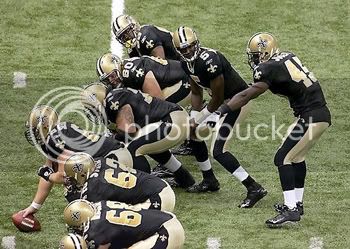 The Saints unsuccessfully tried to
implement the Platypus in 2005.
​

The key to this game is simple. When the Dolphins throw their trickery at us, we’ve got to throw trickery right back. If we can do that, there’s no reason the black and gold won’t be 6-0. Or if we want to be boring about it, we could just pass for 400 yards and completely blow them out. But where's the fun in that?

PREDICTION: Well…that would kind of defeat the purpose of being unpredictable, right?


SAINTS FANS, YOU HAVE HOMEWORK!

Here’s what I want from you. On November 2nd, the Saints will host the Falcons on Monday Night Football (as if I needed to tell you that). I want to know what the Atlanta Falcons mean to you, and no, I’m not talking about “they suck!” I mean truly, when you hear “Atlanta Falcons,” what enters your mind? What memories does that prompt? What stories? Define the Atlanta Falcons and their rivalry with the New Orleans Saints. Send your answers to: thebayoubullet@hotmail.com for a special edition of the Bayou Bulletin next Wednesday!

2. Indianapolis Colts (5-0) – There’s very little separating the Saints and Colts. You could make just as good a case for Indianapolis being number one.

4. Minnesota Vikings (6-0) – The Vikings are a good team. But for the life of me, that’s as far as I can go with it. In fact, come next week, I think the next team on this ranking is going to be ahead of them…

5. (+1) Atlanta Falcons (4-1) – I just noticed that I actually wrote Atlanta in as 4-1 in last week’s rankings. Mistake…or mind power? Regardless, I stand by my claim that by next week, the Falcons will overtake Minnesota.

6. (-3) New York Giants (5-1) – Well, that was unexpected. By the Giants, at least. I’m not sure anyone in New Orleans was surprised. Look for a Giants rebound against the Cardinals.

7. (+4) New England Patriots (4-2) – There’s no way to sugarcoat 59-0 if you’re a Titan. We’d better just get used to the fact that the Patriots will be a contender for the rest of eternity.

9. (unranked) Pittsburgh Steelers (4-2) – After a sluggish start to the year, look who’s suddenly tied for 1st in the AFC North. Did anyone really think the Steelers would stay down forever?

GB over CLE – No clue where I stand on Green Bay, but they’re better than the Browns.
SD over KC – You better believe the Chargers will be mad (and desperate).
IND over STL – Good grief.
NE over TB – Good grief.
PIT over MIN – I’ve picked against the Vikings a few times. Picking against them again.
SF over HOU – I hate, hate, hate the Houston Texans.
CAR over BUF – Anyone who gave up on Carolina did so prematurely. 3-3, here they come.
NYJ over OAK – If the Jets lose this game, they’re in trouble.
CIN over CHI – Mulled over this one a bit, but I’m giving the Bengals the home field edge.
ATL over DAL – Atlanta could be the 2nd best team in the NFC.
NO over MIA – This is a dangerous game.
NYG over ARI – Think the Giants will be mad? Heck yes, they’ll be mad.
PHI over WAS – I’ll put it to you this way…right now, -I- could beat the Redskins.

Enjoyed this article? Email me at thebayoubullet@hotmail.com and tell me about it!

In addition to sports satire, Lee Stephen is the author of a science-fiction novel series. Learn more about it at www.epicuniverse.com or check it out on Amazon.
Show hidden low quality content