Another week, another confounding quarterback scenario. Last week, the quarterbacks in question were Daunte Culpepper and Matthew Stafford. This week, it's even more convoluted. In his game against Carolina, Donovan McNabb went and fractured a rib. Though it was first estimated that he could miss 2-4 weeks, the word on the street is that McNabb will attempt to play through the pain against New Orleans. However, if he is unable to do that, virtual-unknown Kevin Kolb will man the Eagles' offense. But if that weren't annoying enough, the ever-so-annoying Eagles resigned veteran journeyman, Jeff Garcia.

So it got me thinking (always a dangerous thing) about how varied the quarterback talent is in Philadelphia. You've got Donovan McNabb, Kevin Kolb, Jeff Garcia, and eventually Michael Vick. Each one of those players brings a unique skill-set to the table. So then that got me thinking...wouldn't it be cool if the Eagles could do some kind of gene-splice? You know, combine the top qualities of each quarterback and mix them together to create a "best of four worlds" player. I imagine there'd be lots of cool things involved, like lightning, lab coats, and some kind of neon-green ooze, but the end result would be the same. Ladies and gentlemen, I present to you, the ultimate quarterback:

When you combine Donovan McNabb, Kevin Kolb, Jeff Garcia, and Michael Vick, this is the final result. I want to be as clear as I possibly can, here: this is not a guy you want to mess with.

Without a doubt, Donovan McNabb's best asset is his charisma. That&#8217;s because no matter how average he looks on the football field, management always wants to keep him around and the media always follows his moniker with words such as "elite" and "top-5." Who cares if he occasionally pukes in the huddle? Who cares if he couldn't hit a barn with a bazooka? All of those things are trivial when faced with the gorgeous pearly whites of one D. McNabb.

How does that help Diffin McVarb? Like some kind of magical Siren, McVarb is going to lure you into his clutches of infatuation until you see McVarb, and only McVarb. There you'll be, cheering against your beloved Saints as the glory that is Diffin McVarb takes the field. Oh, and it won't just be you. He'll affect the Saints defense, too. You'll see defensive linemen willingly fall, linebackers purposefully avoiding sacks, and cornerbacks and safeties intentionally letting McVarb pad his stats with completions (they'll probably all have him on their fantasy teams, anyway). No one will lay a finger on McVarb because they'll like him too much.

Michael Vick's easy, so we'll hit him next. The quality you'd snag from him is undoubtedly his explosiveness. Attach those legs to McVarb&#8217;s charisma, and suddenly you've got this blinding white smile blazing past you toward the end zone. Who cares if he can't throw? He doesn't need to. In fact, Diffin McVarb doesn't even need arms, since all he'll be doing is running and smiling. A lack of arms would cut down on weight and wind resistance, making McVarb quite possibly the fastest creature in the history of the universe. All they'd need to do is find some way to get the ball to stick to his chest by itself. That could easily be accomplished by removing some of McVarb's ribs, since they apparently aren't too important, anyway. That would free up some space in his torso to stick the pigskin.

Then we've got Kevin Kolb, who is considerably harder to figure out, since no one has actually ever seen him play professional football. But what I did find out upon doing my research disturbed me. Apparently, Kevin Kolb loves to track through the wilderness looking for wild hogs to stab to death. This is not a joke. Kevin Kolb literally runs through the wilderness like some kind of Cro-Magnon Rambo, looking for wild hogs to attack and stab to death. In other words, Kevin Kolb's top quality is that he is completely insane. 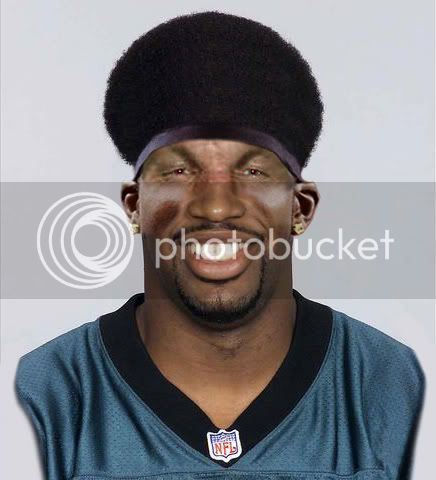 Nothing really needs to be said, here.​

So let's apply insanity to the Diffin McVarb mix. Here you've got a guy with a smile that puts you in a stupor, legs faster than any other human being, no arms, and some kind of chest cavity to stash a football. And now...he's insane?

Am I the only one getting a little scared, here? You've got this guy grinning from ear-to-ear, running across the field like his Madden stats are maxed, going psychopath on defenders. How psychopath, you ask? Maybe he starts spin-kicking them in the face. Maybe he bites off their noses. Maybe he just runs at them with that big smile, screaming at the top of his lungs (you'd run away, too). There are no limits when it comes to the insanity that is Diffin McVarb.

Oh, wait. I forgot about Jeff Garcia. We've got to take something from him.

So there we have him: the bilingual nightmare that is Diffin McVarb. Take a moment and just picture this in your head. You&#8217;re Jonathan Vilma. Suddenly, this no-armed, grinning, zebra-fast psychotic comes running straight at you, screaming at the top of his lungs in Spanish. Look, I'm not going to even attempt to speculate about Jonathan Vilma's manliness, but I will say one thing: I wouldn't hold it against him if he peed.

Thankfully, the worst New Orleans has to fear is Donovan McNabb. Compared to the alternative...I'll take that in a heartbeat.

Prediction: Jonathan Vilma will not pee.


1. Whoever is Playing the Detroit Lions (No Change) - Guess what team hung 45 points this week? Yep, the team playing the Lions. The winning streak continues for Versus!

2. Pittsburgh Steelers (No Change) - Yes, the Steelers won, but did that really look like a convincing performance to you? Not enough to dock them, but I felt better about the Titans in a loss than I did about Pittsburgh in a win.

3. Baltimore Ravens (NC) - All right, Ravens, you get a pass because you turned it on in the end...but you really can't struggle against a team like Kansas City and expect to stay high on this thing.

4. Minnesota Vikings (+2) - Very pedestrian day for Brett Favre, but that&#8217;s what they need out of him. Adrian Peterson is the unquestionable face of this team.

5. Atlanta Falcons (+4) - Solid victory against the Miami Dolphins. The NFC South might be a two-team race.

7. New Orleans Saints (Unranked) - The knock on the defense is out of line. Yes, the Lions scored 27 points. But how they scored them is just as important. Punt and fumble returns aren&#8217;t a defense&#8217;s fault.

8. Philadelphia Eagles (Unranked) - I&#8217;m still not as high on Philadelphia as the rest of the universe, but they put a whipping on the Panthers, and that will put them in these rankings.

9. Tennessee Titans (+2) - I feel much better about the Titans now than I did in week 1. They lost against the Steelers, but played as hard as a team could. This team might not be the disappointment I was afraid they&#8217;d be.

10. New England Patriots (-6) - I have never seen a team get as much underserved hype as the Patriots this week. The Patriots did not beat Buffalo. Buffalo beat Buffalo. The Bills put a whipping on the Patriots for fifty-five minutes, then handed the ball over and said, &#8220;score a few times, we don&#8217;t really want this.&#8221;


Hate this crap? Awesome! Email me at thebayoubullet@hotmail.com and tell me about it!

In addition to sports satire, Lee Stephen (TheBayouBullet) is the author of a science-fiction novel series. Learn more about it at www.epicuniverse.com or check it out on Amazon..
Show hidden low quality content