The Eerie Silence of an N.F.L. Stadium Makes the Game Even More for TV (1 Viewer) 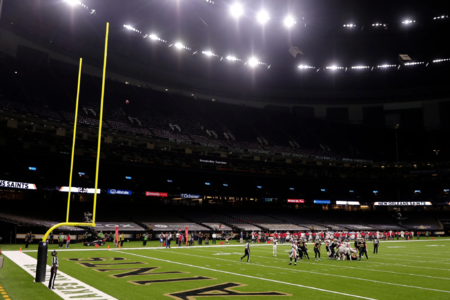 The Superdome in New Orleans had a dystopian feel as football returned without one of its most loyal congregations. Oh, and Tom Brady flopped as the Saints beat the Buccaneers, 34-23.

NEW ORLEANS — The ritual of Saints football went on almost as normal.

The Rev. R. Tony Ricard, the pastor at St. Gabriel the Archangel Roman Catholic Church and a New Orleans Saints chaplain, ended 10:30 a.m. Mass promptly, a neat hour after it began, dispensing with one Sunday rite before the second, a late afternoon home game against the Tom Brady Buccaneers, took hold of the deeply Catholic city.

The draw of Brady vs. Brees, a head-to-head matchup between two of the N.F.L.’s most familiar icons, meant a prime afternoon TV slot but a relatively late start for New Orleans fans, who are generally a six-pack deep for a typical 1 p.m. kickoff, glommed together for a pregame concert in the Champions Square area aside the Superdome or stirring vats of something that started with a roux while packed underneath the Interstate 10 overpass that bounds the northwest side of the stadium grounds.

Instead, black and gold “no tailgating” signs punched the muddy ground on Perdido Street, a warning to no one in particular, since most people in town packed the party inside homes and bars, sent there by a no-fans-at-the-stadium ruling for Week 1 and the surprising threat of Tropical Storm Sally, scheduled to smack the city Monday. The emptiness lent an eeriness to the already dystopian feel of football’s return without one of its most loyal congregations. ...