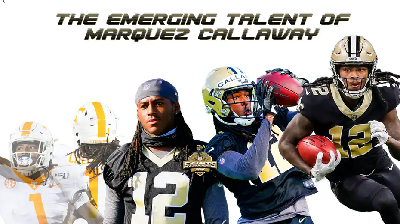 Rookie wide receiver Marquez Callaway has been high on my radar since the NFL
Scouting Combine. I figured the lean and long-armed receiving prospect would
come into Saints Camp and challenge for a roster spot. He did exactly that.
On last Monday night, you could see why head coach Sean Payton, offensive
coordinator, and assistant coach Curtis Johnson are high on Callaway's future
in New Orleans.

During a Saints training video call with media, I asked Sean Payton, "what had he seen from him" about the progress of Callaway. Coach responded, "There's been glimpses you know, he's got speed. He had a few snaps today, where you see it in special teams. He certainly has the one, two. He's learning. He's obviously learning at a very quick pace." Callaway, being undrafted, and the other rookies did not have the rookie camp, OTAs, and other mini-camps to get "up to speed" due to the COVID-19 pandemic forcing teams to shut-down facilities.

Coach Payton referenced the fact every practice essentially was the rookie's preseason games. There wasn't a great buzz surrounding Callaway, but he caught most of the balls thrown his direction. Payton concluded his answer with, "So these practices, in essence, become their preseason games, all of its being evaluated. But he's a player we're looking closely at; I've been encouraged with, with some of his progress."