The Franchise Is Still Growing Up (1 Viewer)

Online
I think I said this before, but I'll say it again.
There have been questions as to what separates teams like the Packers and Giants from the Saints.
For a moment, let's consider those the "blue chip" teams. Franchises that have seen everything. Nothing is new or different. Championship coaches have been fired. The Giants let Parcells and Coughlin go. The Packers let Holmgren go to Seattle. Chicago and Ditka. Same with the 49ers and Walsh and George Seifert. Admittedly, the messed up letting Harbaugh go.
I've said that Mora changed the franchise and he did. But, he will be looked at as a local hero. Payton is the first nationally known successful Saints coach. This is uncharted waters for the Saints. Like it or not, Payton will be the defining Saints coach for the next generation. Most likely, even the next.

Now, this is not a declaration that Payton should be fired. Personally, I think the team should give him one more year to see what he does with the newly acquired cap space. But it can't be argued that this is new for the Saints.

Agree with you, if next year we play like crap then I think I'll move to the camp "we need a new coach even a new GM".

Saint Jack said:
I think I said this before, but I'll say it again.
There have been questions as to what separates teams like the Packers and Giants from the Saints.
Click to expand...

Those two teams have been able to build competent teams around their franchise qbs.

A slump of sub-.500 ball for three seasons does not mean that the Payton/Brees era is over but it certainly doesn't bode well that we have had such eerily similar results three straight seasons with an emphasis on improving the issues that got us where we are today. Is it coaching? Is it an aging Brees? Is it injuries?

We don't seem to be a well-coached team. All of those other factors can swing wins and losses one way or another, but when you commit 8 penalties in the first 20 minutes of football, you have to look at the coach and how his team is prepared.

When your team isn't with fire and passion with multiple opportunities to play into the postseason... you have to look at the preparation of the coaches.

When you routinely commit mind-boggling special teams gaffes...you have to look at the coaches.

When guy like (dare I mention their names) Joe Vitt and McMahon continue to under-perform as coaches but are never held accountable, what does that tell your players? What message does it send?

How much less talented are we than Atlanta or Tampa? What's the difference you see when you watch them play? I see passion and vigor. I don't see that with this team and I haven't in a few years.

We seem complacent and we play complacent. We are a reflection of our coach, I truly believe. 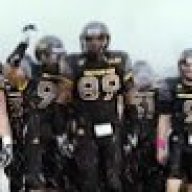 Offline
If we play mediocre next year and the following year, Payton needs to go. If he stays, we'll become Rams 2.0

EagleSaint said:
If we play mediocre next year and the following year, Payton needs to go. If he stays, we'll become Rams 2.0
Click to expand...

Become? We are already there.

People were sick of Haslett and Brooks after multiple 8-8 seasons and Payton/Brees haven't even been giving us that. Haslett's 8-8 is Payton's 7-9, apparently.

It needs to be communicated to both Payton and Brees that anything short of double-digit wins is unacceptable next season. This is ridiculous.

Agree with you, if next year we play like crap then I think I'll move to the camp "we need a new coach even a new GM".
Click to expand...

Agree with this 100%. But I think if the team falls on its face in 2017, that we have to start to redo at the GM level and hire a real GM that knows player personnel to whom the HC reports.

I wrote a little response about how the Spurs entire franchise functions and why it is succesful year after year in the thread about the Spurs and Popovich. The Spurs lost their Brees in Duncan and Ginoble and Parker are really getting older and it doesn't look like they are going to go down at all.

Offline
Hebert last night brought up that Tampa eventually got tired of Gruden. Before that they were tired of Dungy.
OP

If it's 2025 and the Saints don't have a playoff appearance with Payton, then yes. But for now, not even close.


noser222 said:
Hebert last night brought up that Tampa eventually got tired of Gruden. Before that they were tired of Dungy.
Click to expand...

And up until recently, the Bucs were suffering for the past decade after Gruden's departure.

Offline
I&#8217;m not sure anyone ( myself included) realize just how far a team and entire franchise can get &#8220;derailed&#8221; by losing everyone from your Head Coach to Def. Coor. to two &#8220;team-leader/players&#8221; being hugely distracted and the disruption that creates for an organization~!

We were strong and had a solid core or players and Coaches all who had a solid plan for continued growth and success.. I know I certainly had bought into the whole concept which had changed the culture of a perennial haphazard team from year to year and how deeply all of that growth was disrupted by the actions of Roger Goodell who seemed to be the main focus point and our main adversary during that whole debacle. I&#8217;m really in a quandary regarding just how much &#8220;grace&#8221; we should and must give to Coach Payton and Our TEAM for all of the time lost and maybe more importantly the momentum we had going so well and really, obviously, the very BEST we had EVER been broken. How a team recovers from that sort of damage is being played out now and with Our SAINTS as nothing like that had even happened to any TEAM I know of, certainly no NFL TEAM for certain.

Having written all of that I still have trouble expressing just how difficult all of that must be or have been off-putting for the whole organization. We&#8217;re all watching how a TEAM recovers from all of that disruption now and we&#8217;re watching it happen up close and personal as it&#8217;s OUR SAINTS which suffered from the brunt of this unprecedented assault. I can&#8217;t help but feel those actions have affected our TEAM still and we&#8217;re still recovering.

I also know we&#8217;ve all heard and said THIS before but I feel NEXT YEAR will be an amazing one for our team with many changes based on the way this season winds up as the only player putting ALL out there on the field is Cameron Jordan who has played his behind off ever game as if his career depends on it and I appreciate his efforts and am very proud of him and his effort. Frankly, Our Defense has made great strides and next year we should continue to be a force to be reckoned with~!

Offline
We're starting to have a re-occurring war cry lately amongst us fans "Wait till next year".
Show hidden low quality content