Offline
This is for those of us who don't care about electronics deals, don't think it's worth spending 8 hours in line to get $150 off a 42-inch TV, try to avoid leaving the house the day after Thanksgiving, laugh at those idiots on TV spending $3,000 on Christmas presents for everyone they know, and think Black Friday is emblematic of our culture's extreme materialism.


You can, in part, thank FDR for that.

Things were fine until 1939 and President Franklin D. Roosevelt's attempts to manage the economy during the Great Depression. With the Great Depression having been going on for almost a decade and many falling prey to the Keynesian idea that consumer spending was one of the keys to ending the Depression, a number of large retailers were concerned that, with Thanksgiving falling on November 30th that year, thereby pushing the start of the Christmas shopping season into December, that sales would be hurt.

So the leaders of many of the larger stores in the National Retail Dry Goods Association (NRDGA) petitioned President Roosevelt to move Thanksgiving back a week to Thursday November 21, 1939. Roosevelt complied with their request but immediately ran into opposition from many small businesses and other businesses, like calendar companies which had already printed calendars for the next year with Thanksgiving as the last Thursday in November, as well as colleges who had scheduled football games for November 30th.

Ordinary citizens were upset that the nation became split over when to celebrate Thanksgiving. Opposition was so great that many governors and mayors attempted to over ride the President by issuing their own proclamations declaring November 30th as the date for Thanksgiving in their state.

In 1940, November had the usual four Thursdays but President Roosevelt again moved Thanksgiving back a week in an attempt to extend the Christmas shopping season. However, following this act of moving the date a second year in a row, public opposition rose to such a point that President Roosevelt was forced to back down and compromise despite the fact that he had Democratic majorities in both Houses of Congress.

The following year, 1941, Congress passed a bill, which President Roosevelt signed into law, making Thanksgiving a Federal holiday and setting the date as the fourth Thursday in November. This compromise meant that Thanksgiving would generally by the last Thursday in November as, like most months, each day generally occurs only four times in the month. When the fourth Thursday is the last Thursday there is usually about a half a week left in the month (in 1940 it fell on Nov 28th leaving less than four weeks to shop before Christmas). On the few occasions when November has five Thursdays, celebrating Thanksgiving on the fourth Thursday results in four weeks of shopping before Christmas.
Click to expand...

I did it last year.

With that said, that was the only item I went for. I had to still run the gauntlet of the store packed with mostly women (very few men ) and I gotta tell ya, it gets quite ugly. I was witness to women taking things out of other womens carts, yellingcursing at each other in "shopping cart grid-lock", security personnel who were being dragged six ways at once...it was pandemonium.

There is really nothing "holiday" about Black Friday.

Offline
I just got back from shopping since 3am. There's nothing ever worth camping out for, but I will go for some things if I think I can get them by simply showing up when the doors open -- and I'll only go after stuff I can't get online. After a few back and forth trips between Kohls and Target, with a Walmart stop in between, I got everything on my list except one thing, and I barely missed out on getting that one. I was also after the $25. itunes gift cards at Target, but they were gone by the time I got the video game on my son's list and got to the electronics counter. However, I went back around noon to show my husband something, and lo and behold the clerk found a whole box of the itunes cards in the back, so I got those anyway. Sometimes it pays to get there when they open; sometimes it pays to wait. Either way, I saved a ton of money this morning and got stuff I was after.

That being said, I told everyone to please talk me out of it next year.

Offline
i went to the gym and then i ran my errands. Since all the townspeople are at the retail centers, the "bread and circuses" effect meant nobody was where i wanted to be.

Later today i'll change it up and mail some holiday cards on my way to Lowes... i figure since everyone was up super early (see Primadox post above

), they'll be tuckered out by 2pm or so, and i'll have the run of the post office and the stores.

as for my gift-shopping, i'm buying only locally, and most of it is already purchased.

Offline
I went to ToysRUs, Target and Sports Authority today.... after the big crush. Still plenty of deals, and no lines. I saved about $250 (off list price, probably $150 off of normal prudent shopping). Not a bad experience. I think it's only bad if you go right at store opening for those super crazy deals that only 5 people get.
OP
OP

Offline
Another reason why I don't shop on Black Friday.

TulsaSaint said:
Another reason why I don't shop on Black Friday.

It's amazing these people are allowed to do other things like drive a car and vote.

I run from it.

And I'm just amazed that the news covers it as an "event".

Offline
I've worked many a black friday in retail in my highschool and college days and I think it's just about the dumbest thing I've ever seen.

Most of the stores run the sales the week before and week after. The sales are also run online, most with free shipping.

Similar items to that of the door busters can be found just as cheap if not cheaper online at sites like Amazon.com with free shipping.

Also you can head into the store later in the day and companies can usually special order an item that they are out of and have it shipped to the store.

The true door buster items are usually in limited supply (less than 20 per store) and are always of crappy quality.

Congrats on getting that 50 in LCD tv for $100 made from no name company that will break in a year.

Sorry, I have a bad place in my heart for black friday. I feel bad for the employees. For most it is a mandatory work day from open to close.

Offline
Black Friday sales are even that good now, I could be wrongbut I remember some years ago before Black Friday became so big that some things were actually worth leaving the house at midnight for.

Offline
I did Black Friday for the first time this year. I got to the Target on Vets a little after 2:15am, at which point the line was wrapped around the building past the loading docks. They ordered everyone to compress the line about 20 minutes later, which had me at the very beginning of that narrow roadway that leads to the rear parking deck. Good thing my phone was charged because I needed the entertainment. I may have been the only person out there who didn't go with someone else.

They opened promptly at 4am, I walked in at 4:03, found the few items I needed/wanted, then got into the downstairs line (which had wrapped through the ladies clothing section, all the way up to bedding, then across housewares and back down to the escalator where I caught the line). A good sense of humor on my part made the wait not nearly as bad as it could have been (when a steady line flow abruptly stopped: "Uh oh, someone's paying with a check...") and I'd say I was out of there by a little after 5am.

It was raining by then, so I had quite the challenge lugging everything out of the store with no basket (rookie mistake), but thankfully I found an empty basket nearby and pushed everything to the car, got it unloaded, waited a bit before I drove off, and got home right at 6am.

I can't say for sure whether or not I'd do it again, but my personal experience wasn't nearly as bad as I thought it could/would be. 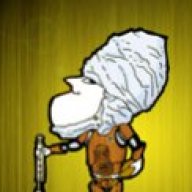 The All Good Things Thread
2