The New Orleans Saints have a unique weapon as they open the NFL playoffs: Taysom Hill. (1 Viewer) 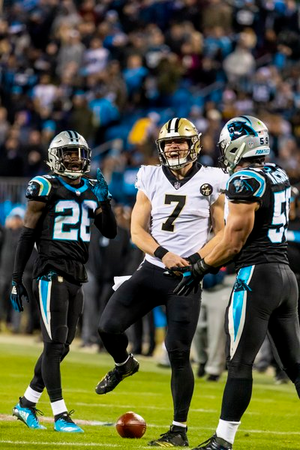 This is how Mitch Mathews likes to explain it.

Because he knows, but admits that he doesn’t know the whole story. But he kind of does. He’s already seen it himself.

When the New Orleans Saints signed Taysom Hill, they had tape on the former BYU quarterback, who could do plenty with the ball in his hands. They had tape on him from his short stint with the Green Bay Packers, too. But they hadn’t felt the Taysom Hill Experience first-hand. Not yet. So when Hill got out there in that No. 7 jersey, Mathews knows Saints coach Sean Payton and his staff were instantly mesmerized. That’s the adjective Mathews, the former BYU wide receiver, uses when explaining how Hill has become a one-man evolution in the NFL.

“It causes you to be mesmerized. You’ve never seen anything like that. It makes you think, ‘Let me see what I can do with this guy. Let me see how far I can take this,’” Mathews explained.

Payton, one of the preeminent offensive minds in the game, indeed saw something he’d never seen before. And he ran with it. Just like the way Mathews, who spent four years playing alongside Hill, thought he would.