Offline
After hearing all the announcers blame the shift in momentum on the power outage and how it gave the 49ers a chance to get back in the game I realized I must have missed when the power went out for the NFC Championship game. The Niners were down 17 and came back to win the game. In the Super Bowl they were down 18 before the power went out and suddenly they mounted a come back.

I'm confused though, the same announcers blaming the power outage on the Niners play, didn't they pick the 49ers to win just a couple hours earlier? Were they expecting the 49ers to win or the Ravens to blow them out for a complete game because I never heard a single one say such things.

Could the 49ers momentum be explained by other things like not allowing a 109 yard kick return or not fumbling or not throwing interceptions or a young QB calming down or coaches making adjustments? Could it be that they forced a turnover with Ray Rice fumbling in Ravens territory allowing them to score back to back TDs in a couple minutes? Could the first TD been from a poor tackle attempt on a WR that has made plays after the catch all season?

Just want to give props to everyone who made the Super Bowl in Nola terrific. The power outage stunk but in the end it had no real impact. The half time show was incredible even though I couldn't care less for the performers. The dome looked amazing inside and out, every single sportswriter, radio and TV personality raved about how great the city was all week long.

Looking forward to the next Super Bowl in Nola but next time we could do without Goodell. 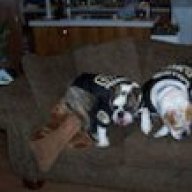 Offline
That's The Night that the Lights Went Out in Georgia"!
Show hidden low quality content