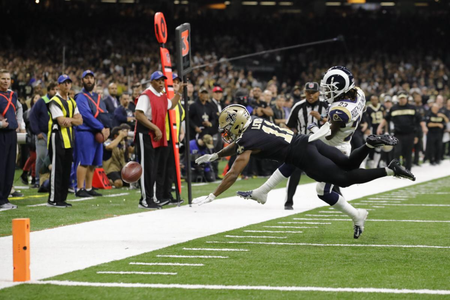 What makes a bad official’s call one of the worst of all time?

Unfortunately for the New Orleans Saints, Sunday’s no call in the NFC championship game against the Los Angeles Rams ticks both boxes.

NFL officials admitted after the game to Saints coach Sean Payton that game officials missed not one but two calls when Rams cornerback Nikell Robey-Coleman slammed into Saints wide receiver Tommylee Lewis on a pass from Drew Brees. The no calls likely cost New Orleans a chance to run the clock down to 15 seconds or so and kick a short field goal that if good would have left Los Angeles relying on a kickoff return or Hail Mary to pull out the win or the tie.

As it was, the Saints had to kick a field goal with 1:41 left, leaving plenty of time for the Rams to send the game to overtime 23-23. After Brees was hit and intercepted, the Rams kicked a field goal to win 26-23 and go to the Super Bowl. ...