The Saints showed how scary they can be with a soul-crushing, 11-minute drive against the Eagles (1 Viewer) 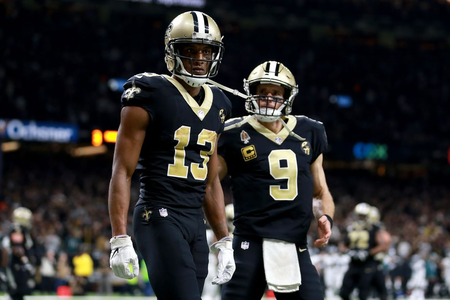 Philadelphia hardly even touched the ball in the third quarter.

No NFL team was a bigger favorite this weekend than the New Orleans Saints, and none of the four winners in the Divisional Round looked more mortal. The Philadelphia Eagles jumped out to a 14-0 lead in the first quarter with the Saints looking out of sorts on both sides of the ball.

Then the New Orleans defense buckled down, and the offense started chipping away at the Eagles’ lead.

Philadelphia never scored again and blew its chance to win in the final minutes when a Nick Foles pass went through the hands of Alshon Jeffery and was intercepted. It closed the book on a 20-14 win for the Saints and booked the team a trip to the NFC Championship.

The Saints have had better days offensively, but they showed exactly what they do best with a demoralizing 18-play drive that took nearly the entire third quarter. It ended with a 2-yard touchdown pass to Michael Thomas that gave New Orleans its first lead of the day.

The drive took 11 minutes, 29 seconds and showed exactly what makes the Saints defense so difficult to stop. ...