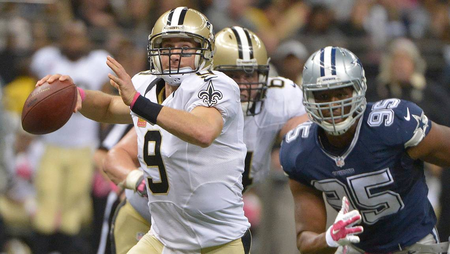 New Orleans Saints quarterback Drew Brees will look to avoid the fate of the 2009 Saints against the Cowboys. Max Faulkner Star-Telegram file

By Brian Allee Walsh - Special to the Sun Herald

Not long ago, FOX NFL analyst/Hall of Fame quarterback Troy Aikman climbed out on a reed-thin limb and shockingly suggested hands-on owner Jerry Jones should blow up his floundering Dallas Cowboys.

Mighty bold bluster coming from the Cowboys legend who earned his spurs leading “America’s Team’‘ to three Super Bowl championships during the ‘90s. In fact, Troy Boy may have crossed the line of unconditional loyalty in Jerry’s world.

The truth can hurt.

The ‘Boys were 3-5 and seemingly going nowhere under coach Jason Garrett, quarterback Dak Prescott, running back Ezekiel Elliott and a fair-to-middlin’ defense.

Now those same Cowboys have pulled themselves up by their snakeskin boot straps and climbed atop the competitive NFC East. Three straight wins against Philadelphia and Atlanta on the road and Washington at home can do wonders. ...