The Top Offseason Needs for the New Orleans Saints (1 Viewer) 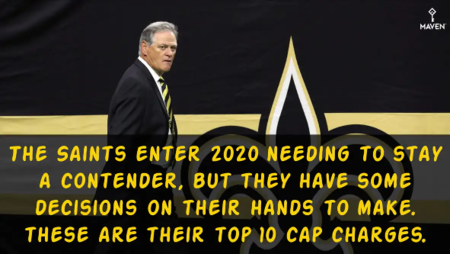 Another season ended in disappointment for the New Orleans Saints, and now they enter the offseason with a lot of questions to answer. Most tend to get wrapped up in the draft process, but before that comes free agency. No matter how you look at it, there are glaring issues that the team should and could address before getting to both points, and they'll have to also shift around some cap space to be players in March.

Here are a few areas the teams can afford to get better at and address in 2020.

The problems the Saints have had at the wide receiver position just didn't happen. It's been evident since the 2017 playoff game against the Minnesota Vikings. Outside of Michael Thomas, the production has just not been there. The team has tried, taking a chance on players like Cameron Meredith, but it hasn't panned out. Quite simply put, this is a group that doesn't scare anyone outside of Thomas. To put Thomas' 1,725 receiving yards in the regular season in perspective, five combined receivers (Ted Ginn Jr., Tre'Quan Smith, Deonte Harris, Austin Carr, and Krishawn Hogan) only managed 692 yards in 2019. Ginn Jr. was fourth on the team with 421 yards behind Alvin Kamara (533) and Jared Cook (705).