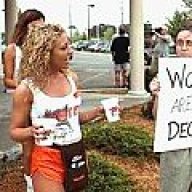 Offline
A whole bundle of things can happen come the end of day one of the draft. Sheppard and supposedly Asomugha are available for trade. At pick 10, we could get Ellis, Dorsey, Rivers, McKelvin, or DRC; or we could trade the pick. The 2nd round pick could also be on the market if the right offer is made, or we cold get another solid defender or TE in the second. They could trade up down in the draft or go left or right for player trades. Who knows?, but this is how I see things going down by late April.

1. Miami - Jake Long OT/ Michigan
Parcells knows that the possition needed to most improve the team is OT. He will improve their offense in pass and run blocking. Jason Taylor is staying so DE is not an immediate need; otherwise, Chris Long might be #1. I think they are just about as comfortable with Beck as they are with Ryan so they pass on him. If things don't improve this season with Beck, there should be another available QB in the top 5 next year, and they will have someone to block his blindside.

2. St. Louis - Chris Long DE/ Virgina
Adam Carriker last year, Long this year. They would be foolish if they didn't seize the opportunity to add another amazing talent in their front 7. He is going to be something to watch in a few years.

3. Atlanta - Matt Ryan QB/ Boston College
The Falcons are a mess. They need someone to take the snaps. The only choise they have here is Ryan. Turner needs someone to take some of the presure off of him next season, and the only way to do that is add a QB capable of throwing the ball. They do not have any relible player that can do that at the moment.

4. Oakland - Darren McFadden RB/ Arkansas
All Davis loves flashy players, just check out his sun glasses and mafioso warm up suits. The coaches know that McFadden will work well with Fargas, similar to Peterson and Taylor. It will help JaMarcus develop more as a complete QB.

5. Kansas City - Ryan Clady OT/ Boise St.
Teams are not stupid; OT is one of the most valuable positions. KC need one. Clady is just as good as any OT in recent years, They take him without hesitation.

6. New York - Vernon Gholston DE/OLB/ Ohio St.
Fast, dynamic player. Can be coached to fit the NFL OLB position. In a couple years he can be the next Merriman. The JEts know they need the LB's after their recent offseason moves. They do think about drafting Mendenhall here though.

7. New England - Leodis McKelvin CB/ Troy St.
They desperatly need help on the corners. For the first time in years they have needed a major improvment in any area of defense. McKelvin, in their opinion, is the best CB and player available. They take him.

8. New Orleans (from Baltimore) - Glen Dorsey DT/ LSU
Honestly, I am not being a homer. This is how I see it happening, and I think I support my reasons well. Not many people think that either DT will drop so far, but as I said earlier, other teams had more important needs (MIA, STL, ATL, OAK). Some other teams just don't value DT as high because of their defensive scheme (NE, NY, KC). Baltimore does not see anyone they need or want that they cant get later; the Saints capitalize. We give them our 1st and next years 2nd; no one else offered them better.

Round 2
We draft best available DB, DT, or OLB. It could be a variety or players (Morgan, Flowers, Abidi). Any will do. I think we go DeJuan Morgan.

Trade
We aquire Sheppard with this years 3rd.

The FO realizes that they can put together veterans with rookies and teach them for the years to come, while also improving the team immediatly. It also gives the team a promising squad to take the NFC South and Lombardi Trophy.

This is not what I want it is what I think will happen. I personally dont like Lito enough to trade picks, but we will see.

WHAT DO YOU THINK?

Offline
we can't give the Ravens next year's second becuase it's part of the conditional part of the Vilma trade.

Offline
Now that the Falcons have picked up the Raider's second round pick, don't be surprised if Atlanta goes for Dorsey with their first pick and tries to either move back into the first round with their two seconds for a QB or wait to see who falls to them in the second and snag one there. Either way, this trade of Hall really screwed the pooch for us looking at either Dorsey/Ellis...in a BIG way!

Offline
I wish we had 3 2nd round picks like Atlanta, they are going to get a lot of good players if they draft well.

Offline
We aren't trading up were sitting still and going BPA, and Sean Payton really likes Ellis, so hed take him before Dorsey

Offline
So we come out with Glenn Dorsey and Lito Sheppard? LOVE IT. (I'd prefer Ellis, still)

Offline
I really don't believe Dorsey and Ellis will still be available by the 8th pick. If we could truly trade a 3rd and get Sheppard and have Dorsey in the fist that would be too good to be true. In addition, we could probably get a guy like Cason in the 2nd round. That would be a home run off season.

Offline
wow if this is how our draft went