they have to be telling him this, is he just not listening? (1 Viewer)

Bush already looks like a seasoned veteran catching the ball out the backfield, but he still looks like a rookie when it comes to running the football at times. I was watching the Colts-Broncos game Sunday and saw a play where Peyton Manning pitched the ball to Joseph Addai, who jogged towards the sidelines, stretching the field and patiently waited for his blockers to set up then cut it up the field and gained about 12 yards for the first down. It was a good example of what Bush still needs to learn how to do. Bush is definitely quicker than Addai, but he needs to learn the right time to use that incredible burst. Right now, Bush is overrunning his blocks and not allowing the play to develop. When he learns patience, Bush will produce more big plays running the football.

Offline
Yes, they have to be telling him this. Yes, he has to be listening. But habits simply don't change overnight. It takes time to break and old habit and time to create a new habit. Ask any golfer who has tried to take a lesson and learn something new in their swing. It can take months.
OP
OP

Online
I dont know any golfers.....but I get you and i'm wit reggie and i know when he finally gets it, its gonna be all over cause then he will have his confidence back.

Offline
The good news is he can only get better,Reggie will get better his pride will push him! 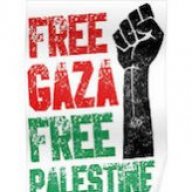 Offline
I really do hope he improves...it doesn't even have to be this year. He's hungry and he wants to be successful, he'a a team player so I think he has lots of potential. My #1 hope is that he can have as healthy of a career as possible. I've always had questions about his durability in the NFL because his limbs are naturally skinny. Hopefully, they'll bulk him up even more (w/out taking away from his speed) over the next couple of seasons.

Offline
It is comming and when it does it will be in a big way. Luckily we have Deuce so all the pressure is not on Reggie and he can learn at his own pace. Reggie will be everything he is supposed to be. Just because it does not happen in his first year means nothing. It is not where you start but where you finish in football and life. I will withold any judgement until the season is over.

Offline
The baltimore game is an unfair assessment since we were down by 21 in the 1st quarter, leaving each running back with a handful of carries. That spin move was a sign of things to come. Keep ya head up Reg, you da man.

Offline
We'll keep hoping for Reggie to come around .... sometime. Do you guys think this team will look at yet another running back during the off season? Lets be honest here..... Reggie isn't an every down back and we all know that Deuce isn't doing well on that knee. I'm sure things could get worse with him not being able to cut or what have you anymore. This game could be THE ONE! We'll have the answer to a few questions: How does this team come together after some adversity, will Deuce be able to carry the load as he did in the first game and has Reggie completely lost confidence in himself?

The old decoy plays are starting to wear thin and unless Reggie can show something, the respect of his TALENT will be lost.

Location
Finally, back in NOLA

Offline
well I think Deuce will get better next year, as knee injuries like his typically take two years to fully recover from. but I agree that the decoy plays are going to stop working as well. though I think that is when reggie will break out. when teams stop keying on him and try to cover him one on one with a linebacker or SS, that's when he's going to go completely nuts, and I can't wait.
OP
OP

Online
What? duece isnt doing well on that knee? did you see the Tampa Game? the 57 yarder? I think that "if" we got rid of duece in the offseason then we would bring in a back who can hammer an offense, because right now what we are doing is trying to duplicate the White and Bush connection at USC, Reggie can still be the number one back but were not tryin to grind out the clock with him, thats just dumb, but that doesnt mean he's not the number one guy because were not hammering him up the middle and on the goaline. Tiki shared his carries until he got stronger (not bigger) and thats eventually whats gonna happen with Reggie, he is gonna get stronger....NOT BIGGER.

meily said:
...Right now, Bush is overrunning his blocks and not allowing the play to develop...
Click to expand...

You said it all right there. It will come though. We will all see.

Offline
Well to me the dump passes arn't working cause thats all the saints do with bush. What happened to the receiver in bush. Why they don't let him run a deep post. some kind of play using his speed is beyond me. The dump passes are not working anymore wheter he is waiting for blocks are not. If the pass is close two line of scrimmage there are always at least two guys on him are that what it seems like. Got the perect play. since they dump the ball to him so much. Act like a dump pass. pump fake too him. that will certainaly get the man covering him two come up. All the wr, on that side of the feild go deep to get they cover guys too follow. then bush will out run the cover guy with no problem since he should be commited to him. then his blockers are already in front of him. i think it will work If my dumb drunk A** can think of this i'm sure they got that play in play book already. They need too use it. I think it would work for good yardage. 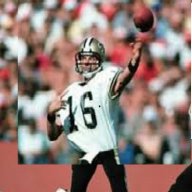 Offline
i agree reggie needs to bemore patient, but for whatever reason, the blocking just ain't there when he gets the ball. i mean, he isn't getting one sliver of daylight. everyone is talking about maroney and addai, but watch the holes those guys get. defenses are loading up to stop reggie every week. give the man some daylight and i don't think we're having this conversation.
Show hidden low quality content