Offline
We must keep and play the best player.


We did keep Pierre Thomas but didn't play him, til the end. I'm not sure he is the answer, but last year he was better than the rest and we didn't play him. Problem.

We kept Fred Thomas, but played Jason David because we paid him big bucks and didn't want to lose face. I hope this year we play whoever is the best,

We didn't call blitzes until after 4 losses, why? we need to fix the problems at half time not 4 games later.


Our Safeties have let more big plays happen than I can stand, how is that playing it SAFE.

We have cover two corners and we play more man coverage, why can't we adjust this before the season ended? Or have we done this yet?

We have the best QB our franchise has ever seen, we still don't need to throw the ball so much, wear down opposing defenses with the power run, and some Reggie.

We have huge money in Grant and soon to be Smith, and Pass rush is what killed our playoff hopes. this has to be fixed

Dt, Brian young is a la Roi Glover type, Hollis is great but getting old, we need a Stud in this rotation. Draft one


Lb Shanle got a big deal and then didn't show up, we need to replace him regardless of salary, Vilma got to be healthy, I would draft a Jarod Mayo
to help.

This team is going nowhere until they learn to use home-field advantage.

The way the saints play elsewhere, 7 wins at home will certainly make them one of the top 2 teams on the NFC, if not the top team.

This is a topic we should discuss, why the saints just can't learn to win at home. It is not a matter of players or coaches. Not since the Dome Patrol-Mora days we have consistently won at home.

4saintspirit said:
we need to score more points then the opponents -- thats what we really need to do to win
Click to expand...

Offline
Why can't we win at home? some teams go undefeated and we have the noise??? 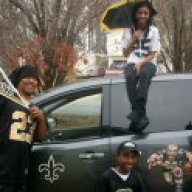 Offline
I'm with you Junkie, we only play who we overpay in this organization, regardless of their production. It makes me sick that it took me all of pre-season to say PT was probably our best RB, and i did that at $0.00 cost to the fans but our "coaching staff" and "front office" needed injuries and 15 games to see the same thing????? Don't even get me started on the defensive side of the ball!!! Who knows what might have happened if they'd played based on talent and not $$$$$????!!!

We kept Fred Thomas, but played Jason David because we paid him big bucks and didn't want to lose face. I hope this year we play whoever is the best,
Click to expand...


Are you saying we needed to play Fred Thomas? I know JD was bad but this is not the answer, maybe go out and trade for someone, maybe throw usama in there and let him take his lumps, but regardless of how bad JD played Fred Thomas should never even have made the team much less seen the field
Show hidden low quality content