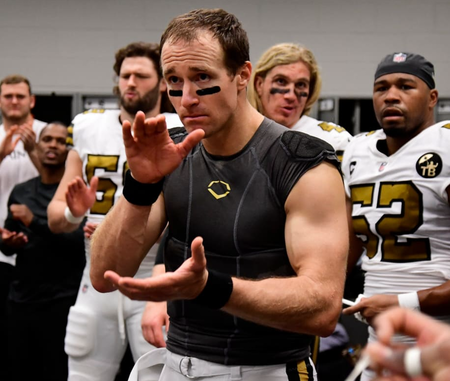 Drew Brees is an institution. He's in the middle of his 13th season as the starting quarterback for the New Orleans Saints after spending the first five years of his career with the San Diego Chargers. He is quite literally without peers in that there is nobody else in the league left from the 2001 NFL draft. The last player who was still around from the second round of that draft besides Brees, who was taken with the 32nd selection, was Dominic Raiola, and the longtime Lions center retired after 2014. Brees' only predecessors left on active rosters are Adam Vinatieri, Phil Dawson, Tom Brady and Sebastian Janikowski.

As Brees prepares to likely set the record for most passing yards in a career on Monday Night Football against Washington, the time he spent before arriving in New Orleans feels like ancient history. The Purdue product struggled early in his career with the Chargers, and after losing his job to Doug Flutie for a stretch of the 2003 season, San Diego used the first pick in the 2004 draft on Eli Manning before trading him to the Giants for Philip Rivers.

Brees then broke out with a Pro Bowl season in 2004 and kept up things with a solid campaign in 2005, only to suffer a torn labrum in his throwing shoulder during Week 17. The Chargers chose to let Brees leave in free agency and turn the job over to Rivers. Brees seemed close to a deal with the Miami Dolphins, only for Miami's doctors to suggest that Brees had only a 25 percent chance of continuing his career. The Dolphins instead chose to trade for Daunte Culpepper, the Saints signed Brees, and the rest is history. ...