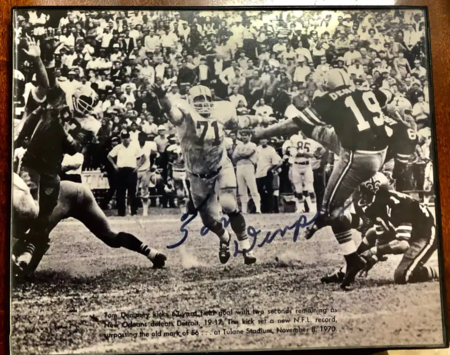 Yesterday we found out that former New Orleans Saints place-kicker Tom Dempsey had passed away due to complications in contracting the Coronavirus.

Dempsey had been diagnosed with dementia in 2012 and later Alzheimer’s disease. Tom fought the good fight in life and never considered himself special in any manner and just wanted to be a regular guy.

We send out our prayers and condolences to his wife Carlene, along with his children Ashley, Meghan and Toby, and his many many friends.

In early 2011 Dempsey came to do a show at the Silver Slipper Casino in Mississippi with Bobby Hebert and me on WWL-Radio. You could see even then signs that I have seen in the past few years with my own Mother who has dementia in that he could remember something that happened 30 to 35 years ago like it was yesterday but had little short-term memory and he had a tendency to repeat himself. But he was thrilled so many folks came to take pictures with him and get his autograph.