So I am sipping my second Beam and 7 on the couch tonight, going through my DVR's recorded shows and am watching Tues. night's Daily Show with John Stewart, love that show.

His guest is Tom Waits...we have one here on the site, but this was the musician...his music is unlike anything Ive ever heard. I am not sure what to make of it...for some reason, its just very very unusual...can someone explain whats his deal? 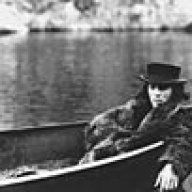 Offline
Tom Waits is the greatest American musician ever, in my fan opinion. Surprisingly, he's relatively obscure in the US, but highly regarded by fellow musicians and his very loyal fans. Elsewhere, he is quite a hot commodity. To the average American music listener, he's probably more well known by popular musicians covering his songs, a la Rod Stewart (Downtown Train), Bruce Springsteen (Jersey Girl), the Eagles (Ol' 55), and on and on and on and on. Amongst musicians, he's an idol. He was invited to play with Roy Orbison on his Black and White Nights show.

Seems to be a much more interesting man and life beyond his music. If his music was interesting to you, you should absolutely investigate. It is difficult to describe him and a fan would feel insufficient in trying to take the responsibility to do so. It sounds crazy, cult-like, but it is fairly accurate. Immense talent.

He's got a thing for Norlins, too. Bless his soul. Cult-like, like I said. Go buy a few albums.

Offline
I always thought he was popular. I have been knowing who that guy was for a long time. He sounds like a old drunk who sings folk songs about the dark side of urban life in a minor key and usually recorded poorly.

Offline
No, you're right. That's how a lot of people hear him.

Offline
What makes this sight so cool, is that he posts here, too.

Wow, what a country.

Offline
that was the first time i saw him as well, he does have his own style, somewhat likey bob dylan in away -

Offline
He also sues a lot - as in lawsuits.

Check out -"Down By Law" I think its the best film ever made in New Orleans and the opening track is a great one done by Tom Waits. He also stars in the movie.

Offline
he played a funny drunk in the movie Short Cuts as well.

Offline
He also played the title role in Primus' "Tommy The Cat" Video.

Offline
I liked the lyrics and music...the vocals on the other hand.

Offline
Frank settled down in the Valley...

One of my favorite muscians of all time.
Show hidden low quality content