Offline
The roof of the Georgia dome is swaying, they pulled the players off the floor and have stopped the game!
OP
OP

Offline
It looks like the roof has been damaged, they may have to postpone the game which is in OT, MSU is leading Bama with about 2 minutes left..

Offline
This is surreal.

There is another topic on SSF
OP
OP

Offline
It appears two holes were ripped into the side of the Georgia Dome roof, looks like they will eventually resume the OT game and may play the late game(Georgia vs UK), the start of that game could be as late as midnight ET!! Nobody was hurt, but outside the Dome, "looks like a war zone" according to one of the Raycom announcers.
.
http://www.sportsline.com/collegebasketball/story/10710029
Last edited: Mar 14, 2008
OP
OP

Offline
We had one touch down around Homer, Simsboro, and Ruston tonight according to spotters and radar. Probably a small tornado as there were no reports of damage beyond downed trees and hail. 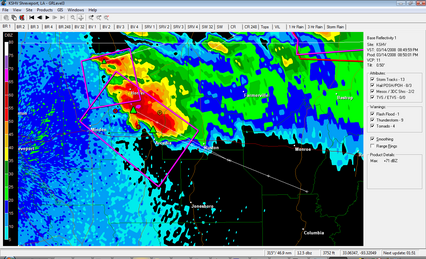 Offline
Daughter #3 called from the basement of Mitchell dorm at Tech. They put all the girls downstairs in the hallway. She was a bit freaked.

I had to chuckle. Last time I was there I looked at the wall by the door and saw an old, faded 1960s Civil Defense Fallout Shelter sign. She's in the safest place she could be for a tornado.

Offline
uk uga game has been moved to tomorrow 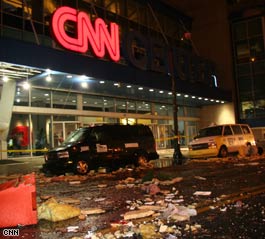 Atlanta Fire Department spokesman Capt. Bill May said there were numerous injuries and widespread damage reported in downtown Atlanta, with roofs ripped off and trees torn down.

The storm tracked from the northwest side of the city to the southeast, demolishing buildings and downing trees that crushed cars and ripped through the roofs of homes.

The National Weather Service had issued a tornado warning for the area, in effect until 10 p.m. The storm came through at about 9:45 p.m.

Inside CNN Center, water poured through damage in the ceiling into the building's atrium. Glass shattered, and parts of the building filled with dust.

Offline
damn that sucks, Tornados are some scary, scary stuff, and yes it sounds like a LOUD train, no question about it. I went through one that threw multiple trees through the house that we were evacuated to for Hurricane Andrew(and it totally destroyed the next door neighbor's house, just the foundation left). It was in Laplace. I lived in New Orleans East at the time and we thought were were getting away from it...

DadsDream said:
Daughter #3 called from the basement of Mitchell dorm at Tech. They put all the girls downstairs in the hallway. She was a bit freaked.

I had to chuckle. Last time I was there I looked at the wall by the door and saw an old, faded 1960s Civil Defense Fallout Shelter sign. She's in the safest place she could be for a tornado.

Undoubtedly. I'm sure they would withstand a storm that would level the newer dorms and apts. At least someone in NLA got to abide by the NWS warning's 'take shelter in your basement' line.
Show hidden low quality content