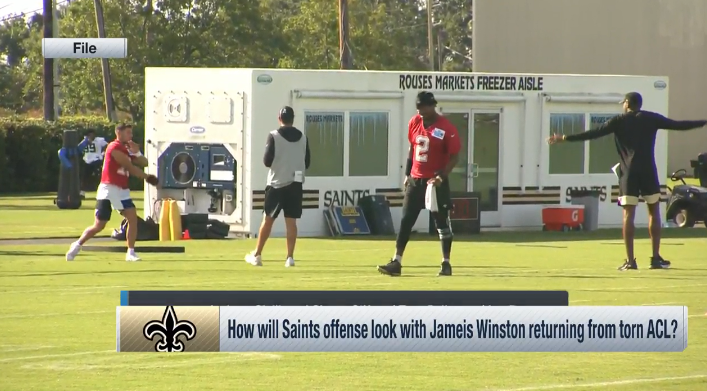 Around the NFL Staff

It's been a little over a week since Michael Thomas (ankle) returned to practice after a brief stay on the PUP list to start camp. The Saints wide receiver is starting to look like his former All-Pro self as the team advances his output. Multiple reports out of New Orleans on Friday say Thomas is flashing his trademark physicality during 1-on-1s and head coach Dennis Allen told reporters after practice that he expects the veteran participating in team drills soon. A healthy Thomas generates a strong WR corps for the Saints, who signed Jarvis Landry and drafted Chris Olave in the first round this offseason; veterans Tre'Quan Smith and Marquez Callaway provide quality depth while Alvin Kamara offers hands out of the backfield. But an intriguing passing attack depends on the status of another recovery with quarterback Jameis Winston coming off an ACL tear. NFL Network Insider Ian Rapoport reported on Inside Training Camp Live Friday that Winston is "about where the Saints want him to be" despite having yet to regain the mobility of his former self. Rapoport referenced last season's ACL recovery of Joe Burrow as a similar situation where the Bengals QB didn't get his legs back until about a month into the 2021 season. Should Thomas and Winston get back to where they once were, the Saints offense has great potential to maintain its prowess following the exit of Sean Payton. ...