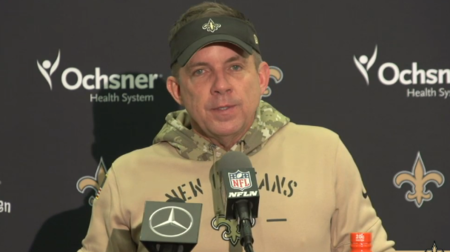 (opening statement)
“Real quickly, obviously it was a disappointing finish for us. First thing I would say, give Atlanta credit. They beat us well in all three areas. They played better than us. Pick a situation and there’s a good chance they won that situation. Third down, they were better both sides of the ball. Penalties they were better. Collectively we’ve got to do a better job and that starts with me. It’s kind of one of those, it’s not a lesson, but this league is too good week-to-week where you can go in and not be focused and ready. This has always been a game played with emotion and I thought they outplayed us. They outplayed us, they outcoached us, and they deserve to win.”

(on Atlanta’s ability to run the ball today)
“I think that had something to do with it, but I think the third down stats were (important). I think they had five first downs by penalty and those were good calls. The drives for them extended and the drives for us didn’t. I thought they were going to be patient and mix it up. They were more effective running the ball than teams we’ve seen to date for quite a while. So again, I’m sure when we look at the tape tomorrow with our players there’s going to be a lot of things we’re going to clean up.”