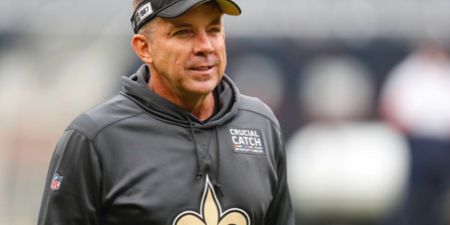 We know that you guys have been working on the development of Deonte (Harris) as a receiver, what are some of the things he's improved on as he's gone along?
"Well, he's someone that has good instincts, and the trick is, how do we get him the ball in space quickly? And I think when we're able to do that, oftentimes, he can make the first guy miss. So yeah, there are some skills. And I think he's a pretty savvy player, he understands the game and leverage. And that helps a lot."

When you're coaching a guy like C.J. Gardner-Johnson, who has the ability to kind of get in an opponent's head, how do you kind of find that balance to get him to be able to do that and stay true to himself and still not hurt the team?
"Well, true to himself better be in line with the team. And so, that's important, it's not okay, if you're drawing personal fouls. And I think that's something he's been good at. He understands where the line is. And he has to, because everyone's counting on him."

How did you think Cesar Ruiz did this week against Akiem Hicks?
"Not bad. A tough matchup. I think he was probably better in some of the protection elements. There's some things in the run game we have to clean up. But overall, solid." ...