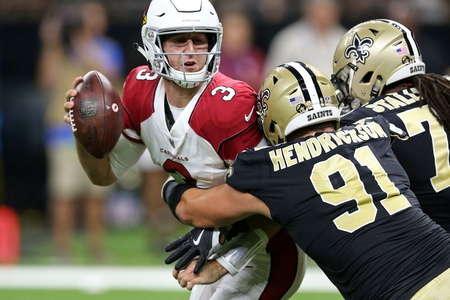 The Saints will have some tough choices to make when the preseason cut comes in a couple of weeks as several players are fighting for limited roster spots.
By Deuce Windham | Canal Street Chronicles

The decision on who to cut off on the defensive line come the end of the preseason is going to be difficult for the New Orleans Saints coaching staff. Without Alex Okafor (ankle sprain), Cameron Jordan (veteran rest) and Marcus Davenport (minor muscle strain) not playing the defensive end players in particular have gotten extra looks and many are the making the most of them.

Several players have received significant snaps on the EDGE through the first two games. Trey Hendrickson (25 Defensive Snaps, 3 Special Teams) has continued where he left off last season and could quietly be in contention for the starting spot opposite Jordan. (This would seem to be Okafor’s to lose, with Davenport being a pass rush specialist). Last week we talked about T-Rex’s ability as a pass rusher and some of his favorite pass rush moves, and this week he showed us even more variety.
Trey Hendrickson

Something mentioned briefly in that article was that Hendrickson wasn’t seen as a stalwart against the run, but it wasn’t necessarily considered a weakness. It is an area of his game that he still had to improve upon and last night showed, that while it’s still a work in progress, it’s trending in the right direction. ...