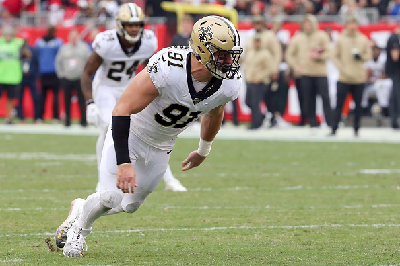 Defensive lineman Trey Hendrickson featured as a rotational piece to the New
Orleans Saints defense his first three years in the league. In 2020, his production
has skyrocketed. Already equalling his career-best of 4.5 sacks. Just five games
into the season. The progress of Trey Henderickson has been a massive boost for
the Saints defense.

Hendrickson was picked in the third round of the 2017 NFL Draft. The team had just missed the playoffs for the third straight season and the defense was once again among the worst in the league.

Coming out of Florida Atlantic, Hendrickson was selected for his high motor and stout run defense. His pash rushing ability was noticeable at the 2017 East-West shrine game where he won defensive player of the game. However, given the level of competition he faced playing for Florida Atlantic, his pass rush technique was not considered polished enough to warrant a higher selection.

Hendrickson flashed in spots his rookie year, sacking quarterback Cam Newton twice in a victory over the Carolina Panthers. Those were the only two sacks of his rookie season. A quiet 2018 season followed and Hendrickson failed to register a sack in the five games he played.

However, signs of Trey Hendrickson’s development were apparent during the 2019 season. In limited playing time as a rotational defensive lineman, Hendrickson registered a career-high 4.5 sacks in 2019. Including two sacks in the team’s season opener on Monday Night Football.