Cage1 said:
What did lake Charles do to piss off God? Good lord, be safe all of you.
Click to expand...

Offline
Just read on NOLA.com that Delta just climbed to Cat 3.
I'll default to the more informed members to put up all the maps and charts with the pretty colors.

Offline
It may be a temporary jog, but the latest satellite shows Delta may have began a more northerly track.

Offline
David Bernard said Hunters found a pressure of 949 on the latest run through, just before the newscast ended.

Large and dangerous hurricane Delta moving toward the NW Gulf of Mexico.

Delta becomes a category 3 hurricane with winds of 115mph

Hurricane Warning is in effect from High Island to Morgan City

Discussion:
Delta has continue to organized today with an eye finally starting to show up on both visible and IR satellite images. Most recent USAF mission pass through the center recorded a central pressure down from 968mb to 954mb and flight level winds of 110-120kts in the NE eyewall. Dropsonde data in the SW eyewall recorded winds near the surface of 110kts (125mph) The overall structure of the hurricane continues to improve and Delta will likely continue to intensify through the night. Delta is moving toward the NW around 15mph and should begin to turn toward the NNW and N tonight.

Track:
There has been no changes in the track forecast and Delta is moving along the forecasted track as expected. Along this track, Delta should make landfall over SW Louisiana Friday afternoon and evening. Due to the expected expansion of the wind field, TS warnings have been extended westward along the TX coast.

Intensity:
As mentioned the overall structure of Delta continues to improve with an eye appearing in satellite images and dual outflow channels to the north and the south helping to move rising air near the center of the hurricane outward. Conditions are near ideal for intensification through tonight, but as Delta moves northward over the western Gulf on Friday upper level winds will be increasing from the SW due to a trough over TX and sea surface temperatures will be decreasing as Delta nears the US coast. Both of these factors will likely lead to some degree of weakening, but exactly how much is in question and the point should be clear that regardless of weakening Delta will be a large and significant hurricane at landfall over SW Louisiana

Offline
The latest track seems to suggest it will come through NE Louisiana as a Tropical Storm east of Monroe sometime very early Saturday morning. Hopefully that means Ouachita Parish won't get hit as hard as we did by Laura. 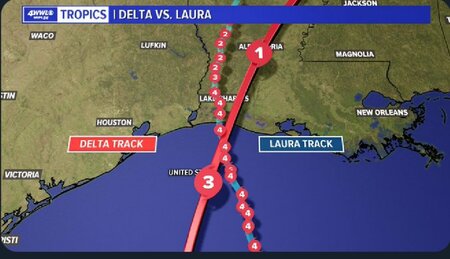 faceman said:
It may be a temporary jog, but the latest satellite shows Delta may have began a more northerly track.

That would be good for LC if they predict the NE movement within next 24 hrs. Would bring delta closer to Vermilion Bay. Bad for New Iberia but dang those folks in LC just don't need this.

Online
Brownsville picking up the eye on radar... 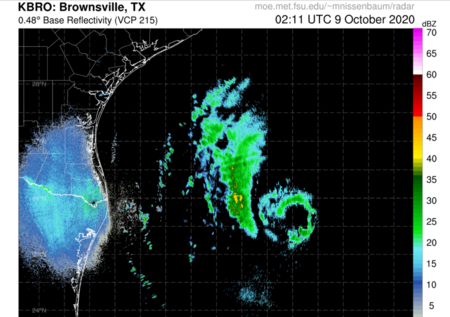 Saint_Ward said:
Brownsville picking up the eye on radar...

It's looking a bit ragged, at least to my untrained eye.

Offline
7 o'clock update will an ever so slight easterly shift

Conditions along the coast will be deteriorating today as both storm surge and winds increase.

Discussion:
USAF and NOAA aircraft have been in Delta all night and it appears the hurricane has bottomed out on the pressure around 953mb and winds of 120mph. Recent passes indicate the pressure may be starting to rise and the satellite images show a general erosion on the southwest side and no longer show an eye feature. It appears the much anticipated SW wind shear along the TX coast is starting to impact the hurricane. Overnight, Delta passed nearly directly over NOAA Buoy 42002, 200 miles east of Brownsville which gusted over 70kts and reported seas of 35 feet. Currently, NOAA buoy 42019, 60 miles south of Freeport is gusting to 52mph and 17 foot swells. Anadarko Oil platform (KGUL), 165 feet in the air has gusted to 85mph this morning.

Tide stations along the upper Texas coast indicate that water levels are between 1-2 feet above MHHW (vegetation line) currently and high tide was around 1-3am this morning. Since the high tide, there has been very little decrease in the water level and this is due to the push of the water ahead of Delta and the increasing large swells now marking their way onto the coast. Tides levels will hover in the 1-3 feet above MHW range for much of the day.

Radar shows the outer western rain shield of Delta has expanded into SE TX overnight with numerous squalls approaching the coast. There will be a fairly sharp gradient in the rainfall today with areas west of I-45 and SH 288 likely experiencing the lower amounts and areas east of that line 1-2 inches, especially in Chambers and Liberty Counties.

Conditions should begin to rapidly improve this evening as Delta moves inland over southwestern Louisiana.

bonnjer said:
It's looking a bit ragged, at least to my untrained eye.
Click to expand...

Radar only extends out to 80 miles.

Offline
This is the long-range base loop out of Houston/Galveston. 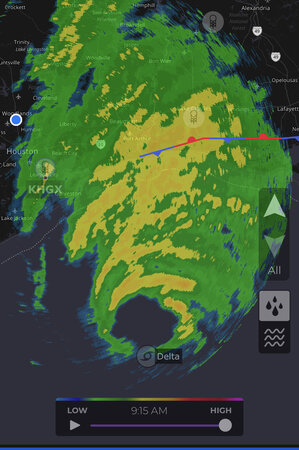 Users Who Are Viewing This Thread (Users: 5, Guests: 7)