faceman said:
Looks like a landfall between Jennings and Lafayette on it's current track
Click to expand...

The 10 a.m. NHC track incorporated a fairly major shift westward this late before landfall. The eye is now predicted to pass about halfway between Lake Charles and Jennings. 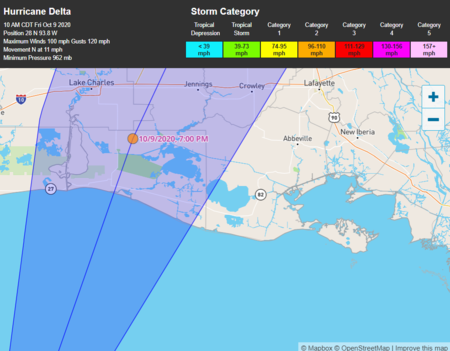 Delta weakens slightly, but still a major hurricane with sustained winds of 115mph.

Recon missions this morning have indicated that the central pressure of Delta has risen from 958mb to 962mb and winds have decreased slightly from 120mph to 115mph. The hurricane continues to move northward at 13mph and a turn toward the NNE should occur in the next few hours.

Tropical storm force winds are now impacting the coastal areas with Galveston having recently gusted to 44mph. Offshore buoy 20 miles east of Galveston is gusting to 47mph and the buoy 60 miles south of Freeport has gusted to 60mph. An elevated platform off the Matagorda County coast is currently sustained at 48g57mph. Tropical storm force winds will begin to expand across coastal Brazoria, Galveston, Chambers and into southern Liberty and SE Harris County over the next several hours.

Tides have been holding near steady this morning in the 1-2 ft above MHHW levels as storm surge and wave action continues along the coast. The area is moving toward low tide so levels should remain steady near current levels through midday which is low tide. The maximum push of water toward the Louisiana coast is underway and water levels will rise quickly over the next several hours.

The western edge of the rain shield has continued to stop along the I-45/SH 288 corridor and do not expect any additional westward expansion of this shield today. E and SE parts of Harris County have recorded .25-5.0 of an inch of rainfall in bands this morning and additional amounts of 1-2 inches will be possible east of I-45 today.

Doug B said:
The 10 a.m. NHC track incorporated a fairly major shift westward this late before landfall. The eye is now predicted to pass about halfway between Lake Charles and Jennings.

Still a major, but a good sign if it's already starting to go up in pressure and down in winds, right? Has it even hit the cooler waters yet?

Online
Just a little rain starting in youngsville. Nothing crazy yet.

Offline
Just saw on the weather channel that the hurricane hunters could only find winds of about 90 mph close to the surface. That would be a blessing. It shouldn't be able to strengthen at this point, right? 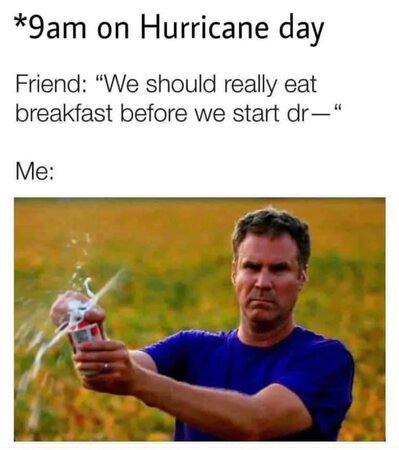 Dry air is getting pulled into that quadrant. That's good news

Tides continue to hold steading in the 2.0-2.5 ft above MHHW range and with large wave action on the beaches, overwash and coastal flooding is occurring along the upper TX coast. Tidal flooding in SE Harris County has been limited thus far and as winds turn N and NNW late this afternoon water will begin to drive south out of the upper parts of the Bay.

Tide gages in SW Louisiana show significant rises in the last hour as the core of Delta moves toward the coast and maximum push of water will occur over the next few hours.

Update. I’ve had a lot of beer.

Biggest concern? Staying up long enough to catch a couple quarters or the NBA finals.

Users Who Are Viewing This Thread (Users: 5, Guests: 6)