Underhill: What Michael Thomas is doing this season is not normal (1 Viewer) 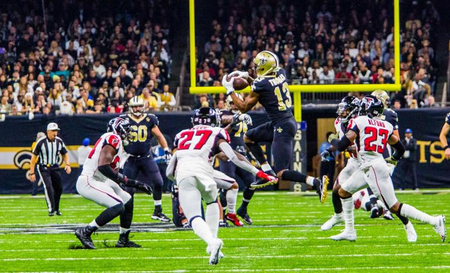 Michael Thomas is basically a running back.

And not the Alvin Kamara type, who runs a lot of receiver routes and gets targeted on difficult passes. The Saints wide receiver has been so reliable this season his catch rates rank alongside running backs who only contribute on screens, dump offs and other low-risk passes.

Thomas has caught an astounding 88.7 percent of his targets, which is the highest mark for a season by a wide receiver since Austin Collie, who worked the slot, reeled in 81.7 percent of his passes while playing for the Colts in 2011. No other receivers topped 77 percent during that span until this season.

The next guy on this year’s list is Titans running back Dion Lewis. He has 36 catches on 39 targets. Twenty-six of his receptions have come on screens, passes to the flats and swing and angle routes (all but one of those traveled 3 or fewer yards through the air). The NFL as a whole has completed 84.4 percent of its passes fitting the same criteria, according to Sports Info Solutions. ...